PHUKET: There seems to be a game afoot, and people are starting to smell it. Phuket yesterday passed the magical milestone of 21 days without a new confirmed COVID-19 infection that has yet to be confirmed by experts in Bangkok. 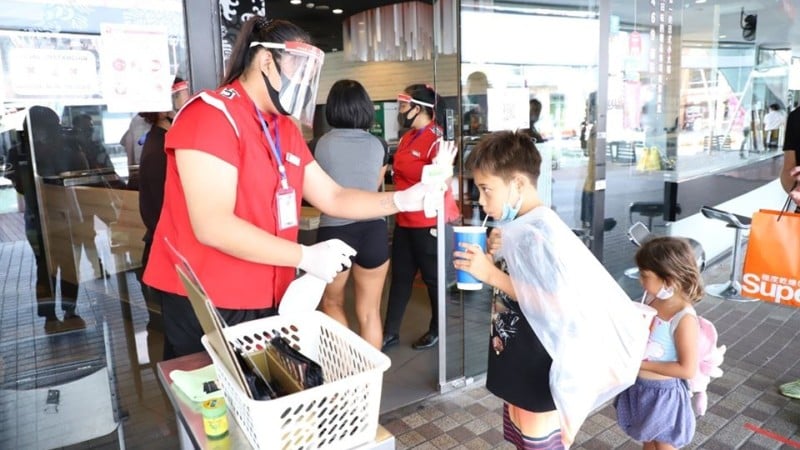 Children have their temperature checked in Patong. Photo: PPHO

All six cases since May 2, when three people in Bang Tao were confirmed as infected, have yet to have their test results by experts in Bangkok announced publicly.

Despite the reporting of an Italian engineer in Cherng Talay being “confirmed” as infected with COVID-19 yesterday, that “confirmation” has yet to be reported directly by the Phuket Provincial Health Office, which serves as the Phuket Coronavirus disease 2019 (COVID-19) Incident Command Center.

The last time the PPHO failed to post its own daily report was with reporting of the four “confirmed” cases, including the Patong Police officer, reported by Phuket office of the Public Relations Department on May 10.

PPHO Chief Dr Thanit Sermkaew only on Tuesday (May 19) confirmed that the four reported on May 10 are all awaiting confirmation by tests being carried out by Ramathibodi Hospital and the Bamrasnaradura Infectious Diseases Institute, both in Bangkok.

However, that did seem like overkill, especially after Deputy Public Health Minister Sathit Pitutecha last week announced in person at a meeting at Phuket Provincial Hall that the four had been rechecked and found not infected.

“In the latest cases, where four infections were found, the Department of Medical Sciences repeatedly checked three times to confirm the results clearly as negative, not infected,” Dr Sathit said.

However, Dr Sathit at that same meeting did confirm that Phuket airport would open on May 16. He was wrong on that one.

Dr Thanit on Tuesday also confirmed that even the roommate of the 27-year-old Patong shopping centre staffer who was reported as a “confirmed case” earlier this week was waiting for test results from Bangkok. We would presume that the same is for the actual “confirmed case” as well.

Meanwhile, as the PPHO has yet to announce any recognition of the Italian engineer being “confirmed” as infected, all people have to go on is the new policy Dr Thanit explained on Tuesday of having cases reconfirmed by experts in the capital.

Of note, Dr Thanit on Tuesday did explain, “There will be no decisions as to whether any areas will be placed under lockdown again until those test results have been confirmed.” Of course not.

So why is the 21 days the magical number? Because only earlier this week did Tourism and Sports Minister Phiphat Ratchakitprakarn reveal that his ministry plans to discuss with the prime minister permission to allow domestic tourism to start in provinces that reported zero new cases for the past 21 days.

Further, this proposal comes as the Centre for COVID-19 Situation Administration (CCSA) in Bangkok, which is coordinating the government’s anti-COVID campaign, will next Friday (May 29) “discuss” not only reducing the curfew further, from midnight to 4am, but also allowing more business types to reopen on June 1 under Phase 3 of easing the lockdown restrictions.

The last time the CCSA “discussed” easing of lockdown restrictions introduced to help prevent the spread of COVID-19, less than 48 hours later Phase 2 of easing the restrictions was rolled out, allowing a huge number of businesses, including shopping malls, to open.

If Phuket can make through next week without any new confirmed cases, or any of the outstanding six cases still “waiting for confirmation” by experts in Bangkok being returned as positive, then the island will qualify under Minister Phipat’s proposal.

What really boggles the mind is that even if the tests of the last two most recent cases are returned positive – if we take Deputy Health Minister Mr Sathit at his word that the four on May 10 have been confirmed as negative – what impact should these last two really have? Two confirmed cases in two weeks on an island nearly the size of Singapore is a record any place would be proud of.

This may be all just a coincidence, or it may be the result of tactical reporting and “planned serendipity”. You be the judge of that one. One thing is for sure, we will find out by the end of the coming week.