PHUKET: Chalermluck Kebsup has drawn a clear line for voters in the upcoming municipal election for Patong Mayor: vote for the brother of the man deeply involved in the running of taxis and tuk-tuks in the town, or vote for the person pushing for an actual form of public transport to be brought to Patong.

opinionpatongtransporttourismeconomicspolitics
By The Phuket News 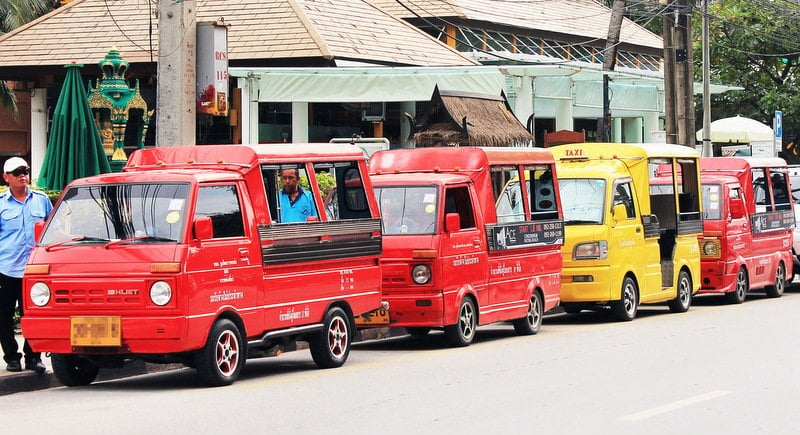 Whether to allow tuk-tuk and taxi drivers to continue to rule Patong has just been put on the agenda. Photo: The Phuket News / file

The election is to be held on Mar 28. Pakrit Keeesin, younger brother of influential Patong businessman Preechawut ‘Prab’ Keesin, last weekend announced that he will contest the seat of mayor in the upcoming municipal election.

Ms Chalermluck announced her intention to run for re-election by Tuesday this week.

Campaigning in earnest is expected to begin in the coming week. The Phuket office of the Election Commission of Thailand (PEC) is expected to declare all mayors and municipal councils no longer able to perform any official duties as standard procedure ahead of an election tomorrow (Feb 1), making the timing of the announcement of the proposed electric bus service in Patong impeccable. The project is already in motion, and it will take some almighty efforts to run it off the road by the time the eventual winner of the election takes office.

That said, it is not lost on The Phuket News the incredible clout Phuket’s taxi and tuk-tuk cartels and cooperatives have, especially in Patong, while also noting that candidate Mr Pakrit’s brother Mr Prab helms only one of the companies, not all of them. Very few towns could boast the level of “integrated cooperation” taxi and tuk-tuk drivers in Patong have. Any disputes are resolved either by blockades or simply shooting dead a rival that poses a threat, including motorbike taxi touts.

It is also not lost on The Phuket News that Ms Chalermluck was elected Patong Mayor in 2014, the year of the military-backed crackdown on Phuket’s taxi mafia, winning the election with just 3,330 votes. That was all that was needed to take the big chair in the busiest tourism town on the island, at a time when Phuket generated some B800 billion a year in tourism revenues.

It will be an interesting ride to see how the Patong election pans out, now that the only people left in the town are actual residents. The old ploy of paying employees to change their registered address in order to cast their vote “the right way” is not expected to be a factor this year.

Over the years no single segment of Phuket tourism businesses has done more damage to the island’s tourism image than our illustrious “public transport industry”, as officials continue to call it despite every aspect of it being privately owned and operated, through countless incidents of violence and ripoffs in the past.

The residents of Patong are about to be given a choice. It’s a pity that other true stakeholders won’t get a vote too.