PHUKET: As Phuket approaches the end of its first week since the government contract ended last Saturday (Sept 30) for the Phuket Lifeguard Service to provide lifeguards at Phuket’s key tourist beaches, the island’s beach safety situation has not improved.

tourismmarineaccidentsdeath
By The Phuket News 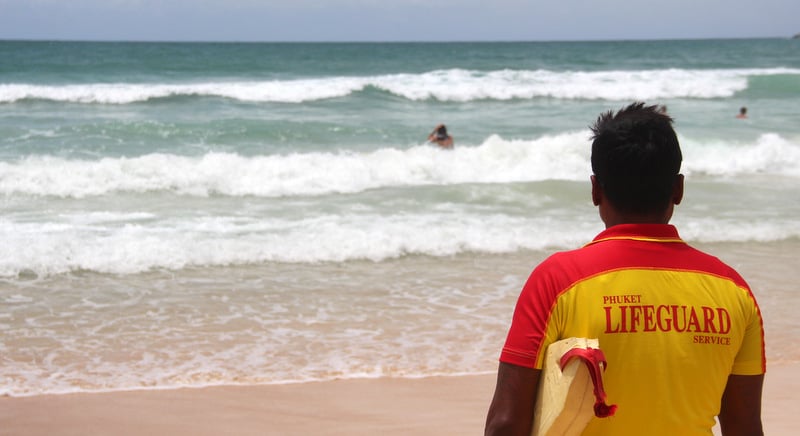 The Phuket Provincial Administration Organisation (PPAO, or OrBorJor) – which launched a 1% room tax on all hotel rooms rented out across the island in 2000 on the promise of providing lifeguards at Phuket’s beaches – held emergency meetings on Tuesday and yesterday (Oct 3-4) to discuss the ongoing lifeguard crisis.

However, the meetings were closed to the media.

No persons at the PPAO this week have been willing or available to confirm any details of the current situation about the lifeguard crisis, despite many repeated attempts by The Phuket News to solicit comment.

Hence, no official source could confirm how many lifeguards, Navy personnel, Civil Defense Volunteers were on patrol at which beaches, which hours they patrol, what training do they have or what equipment they have at the disposal to save tourists’ lives.

Consequently, as of Wednesday, no officials at the PPAO could or would confirm any details of the new lifeguard service contract being drawn up, including the value of the contract to be offered, how many lifeguards were to patrol which beaches, for how many months nevermind which months, whether the new contract will includes patrols for one extra hour after sunset as ordered by Gov Norraphat earlier this year, or when they intend to open bidding for the government contract or how long will the current situation will continue.

At last report from the PPAO, Council President Teera Jiasakun publicly vowed to have lifeguards on Phuket’s beaches last Sunday, the day after the Phuket Lifeguard Service contract expired.

Instead, Phuket Governor Norraphat Plodthong has led the charge in the last-ditch scramble to get some sense of security on Phuket’s world-renowned beaches.

So far, The Phuket News has yet to identify any reports, including in the Thai media, confirming that the PPAO has been directly involved in getting any lifeguards on any beaches without Gov Norraphat’s direction.

The best The Phuket News could confirm, as of yesterday (Oct 4), was that Patong Beach was patrolled by 14 lifeguards bolstered by some Patong Municipality Department of Disaster Prevention and Mitigation (DDPM) officials and Civil Defense Volunteers, but no Navy support as is present elsewhere.

The lifeguards were “ordered” to continue providing their services for at least another month and hence “hired” by the PPAO, reported the Phuket Public Relations office.

However, after just one day back on the job the lifeguards appealed directly to Patong Mayor Chalermluck Kebsup for equipment funding – the very same issue that led to the PLS declining to bid for the PPAO contract to provide lifeguard services. (See story here.)

Further north, professional lifeguards from the Surin-Bangtao Surf Lifesaving Club have volunteered to continue patrol the beaches at Surin, Bang Tao and Nai Thon, accompanied by two Navy personnel. However, the evident lack of training of the two Navy assigned personnel assigned lifesaving duties has raised fears that they might endanger themselves if forced to enter dangerous surf to rescue others. (See story here.)

Meanwhile, following police initially confirming they had “no idea” if any lifeguards were still patrolling Kata and Karon beaches where 22-year-old Chinese tourist Shi Yiqeng died after being pulled away from the beach by a strong rip tide at Kata last Saturday (see story here), Wanchai Saetan, Public Works Chief at Karon Municipality*, yesterday confirmed, “We cannot hire lifeguards for the time being, but some of those who previously worked as lifeguards at our beaches have stayed to patrol and carry out rescues for free, for the time being.

“At this stage I cannot confirm exactly how many lifeguards we have, but we do also have local DDPM and Civil Defense Volunteers as well as some Navy personnel providing assistance.”

Rawai Mayor Aroon Solos confirmed that the same lifeguards have been hired to patrol Nai Harn and Yanui beaches, but that Rawai Municipality is paying the lifeguards – the PPAO is contributing nothing.

“We are doing what we can. I ordered our DDPM officers and our rescue team to help, and local businesses owners are also helping,” he said.

“The OrBorJor must provide an emergency budget for us. This is their responsibility. We don’t have any budget, but somehow we now have to buy rescue equipment and red flags for ourselves.”

Mayor Aroon said the lifeguards were essential for beach safety. “Lifeguards are a must for tourists,” he said.

The situation at Kamala Beach is the same. No officials were willing to be named publicly, but one senior source at Kamala Tambon Administartive Organisation (OrBorTor) confirmed, “The lifeguards who worked here have stayed on for free. We cannot afford to pay them, we have no budget available to pay them with.

“We cannot go on like this. We cannot do this alone. Right now we even have officials walking along the beach to tell people to not swim where red flags are posted, but that is all they can do.

“They cannot go into the water to rescue people. They are not trained and this just makes it dangerous for them too,” the official said.

* Not acting Chief Administrative Officer (Palad) at Karon Municipality, as originally reported. The error is regretted.