PHUKET: Dr Kusak Kukiattikoon, Chief of the Phuket Provincial Public Health Office (PPHO), today confirmed that the two most recent COVID deaths recorded in Phuket were that of a German national and a Thai woman suffering ALS. 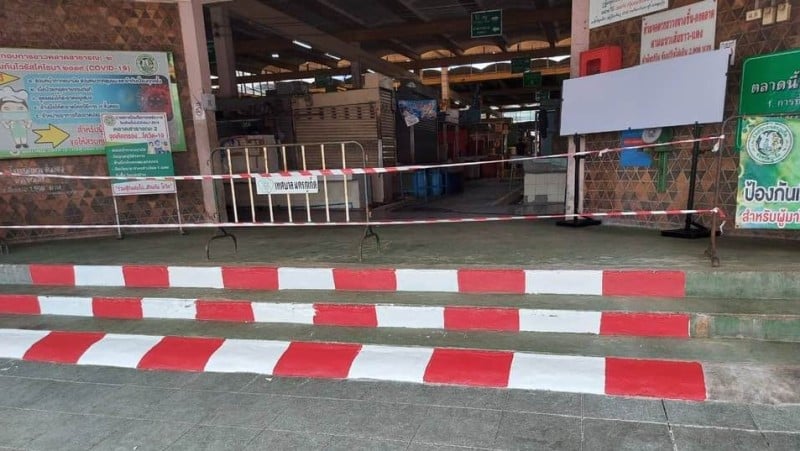 The news was delivered by a live broadcast this morning (June 16), resumed after more than a week of Phuket officials not holding the standard daily briefing.

Dr Kusak recognised that Phuket so far had suffered five deaths attributed to COVID-19 since the ‘Third Wave’ outbreak hit the island on Apr 3.

“In the past week, we had two deaths including a Thai woman who worked at the Talad Kaset fresh market on Ong Sim Phai Rd in Phuket Town.

“The other death was a German national,” he said.

In its daily reports the PPHO marked that Phuket suffered its fifth COVID death on June 12, preceded by the island’s fourth COVID death just one day earlier, on June 11.

This morning, however, Dr Kusak did not clarify which person died on which day.

He did not reveal even the ages of the victims.

“The two had suffered from chronic diseases. The Thai woman had amyotrophic lateral sclerosis [ALS] and was taking prednisolone. She was more fragile than people in general,” Dr Kusak said.

“For the German case, this case had a heart disease and diabetes, as well as a high body weight, about 130kg. This case was not as fit and healthy as normal people,” he added.

Dr Kusak gave no details at all about the third COVID death on the island during the current outbreak, marked by the PPHO daily report on June 2. That death remains unexplained.

Dr Kusak pointed out that seven new infections recorded on Monday and Tuesday this week were mostly from contact tracing and testing of people in the Poonphon area and those working at the Phuket City Municipality ‘Talad Kaset’ fresh market on Ong Sim Phai Rd in Phuket Town.

Phuket City Mayor Saroj Angkhanapilas ordered the market closed on June 2 as health officials ramped up their contact tracing efforts following the death of an 86-year-old Thai woman on June 1, the island’s second death due to COVID during the current outbreak.

The market is currently set to reopen on Friday (June 18).

“The four cases found infected on June 14 were all Myanmar national workers who worked at the Talad Kaset market, and they did not have any symptoms [of infections],” Dr Kusak said.

“One of the four cases was confirmed infected while he was being prepared to undergo a surgical operation,” he noted.

“The three cases yesterday were a Myanmar national, a Thai and an Israeli national,” Dr Kusak continued.

“The Israeli was confirmed infected when the person was tested in order to be issued a fit-to-fly document. The Thai and Myanmar cases involved the Poonphon cluster,” he said.

Dr Kusak said that he had already been informed on three new cases to be recorded today, that of one Thai national and the other two being children of the Israeli who has now tested positive.

“The children were found to be infected when they were tested before staying at a Local Quarantine venue last night,” Dr Kusak said.

Dr Kusak confirmed that proactive testing was continuing across the island in the hope of containing community infections.

“For proactive screening, in May, we conducted screening campaigns in 23 areas and tested 4,308 people, and found 11 infected cases,” Dr Kusak said.

“In June, so far we have conducted screening in five  areas and tested about 1,000 people. Today [June 16] we will conduct tests of workers at the fishing port in Rassada,” he added.