Water-Supplynatural-resourcesconstruction
By The Phuket News 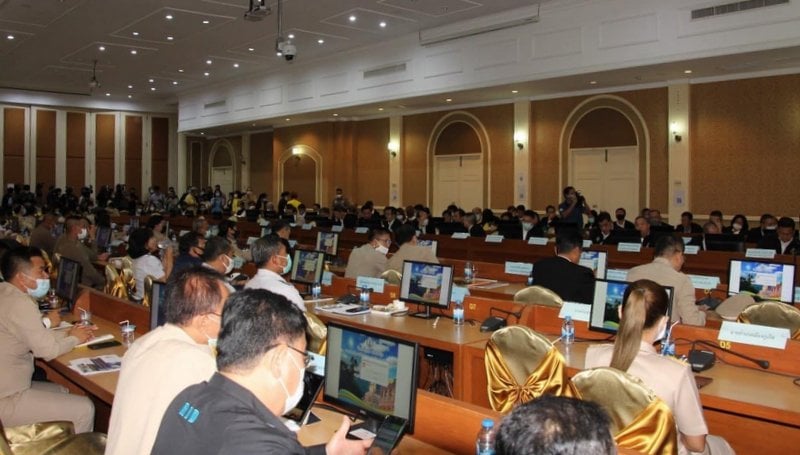 Deputy PM Prawit this morning was brought up to speed on the recurring issue of Phuket running out of mains supply water that leaves residents in certain areas, notably the poor neighbourhood in Soi Kingkaew, Rassada, without tap water for months.

Instead such communities rely on water tanks installed on the street in their areas, and must literally fetch buckets of water to carry back to their homes.

Mr Somkiat pointed out that Phuket traditionally had a huge ‘hidden population’ of people not registered as living on the island, and that the previous large number of tourists visiting the island, which he estimated at 14 million tourists annually, generated more than B400 billion for the country each year.

The increase in the number of tourists in recent years and the rapid expansion of urban communities on the island had seen demand for tap water skyrocket, Mr Somkiat explained.

“Therefore, it is imperative to plan solutions to the water sustainability problem covering all sectors for the good life of the people and the overall economy of the country,” he said.

Mr Somkiat also explained that the ONWR on Sept 12 last year had approved the construction, improvement and expansion of Provincial Waterworks Authority water-supply development projects in Phang Nga and Phuket to boost water supply to the island by 49 million cubic metres per year.

The ONWR on July 22 this year also approved in principle a Phuket Water Project, Cost and Action Plan for 2020-2022, which included thee other “Short Term (Urgent) projects”: 1) to boost the water-holding capacity of the Bang Neow Dam reservoir in Srisoonthorn from 7.20mn cubic metres to 8.70m cubic metres; 2) to boost tap water production facilities supplied by Bang Neow Dam by 10mn cubic metres as year; and 3) to develop wastewater treatment project to produce tap water to boost the water that can be supplied by Phuket City Municipality by 1,600 cubic metres per day, totalling 0.584 million cubic meters per year.

Further projects approved by the ONWR included an in-depth analysis of the area conditions in order to determine the direction of water resource development for Phuket to make sure that the plan are in accordance with the 20-year national development plan, Mr Somkiat said.

After the meeting, Deputy PM Prawit was to visit the Phuket office of the Provincial Waterworks Authority to hear firsthand how the office manages water supply across the island and its proposed solutions to the problems.

Mr Prawit was to be briefed on the Phang Nga-Phuket Waterworks Project and ideas on increasing water supply, such as boosting the production of tap water from sources including the desalination plant in Karon.

Of note, due to works on the pipelines from the desalination plant to surrounding areas, including large areas of southern Patong, supply from the plant will be heavily affected, leaving many households and businesses without mains water supply throughout the day for over a week, starting next Monday (Nov 9).

Despite Mr Somkiat’s explanation this morning, Provincial Waterworks Authority (PWA) Chief Graisorn Mahamad in August confirmed that the project to install a pipeline from Phang Nga to supply tap water to the island had been delayed by bureaucratic hurdles, despite being approved by Cabinet in September last year.

Also, yet to be approved were six smaller projects aimed at being stop-gap measures to help boost Phuket’s water-supply ability in the short term, Mr Graisorn pointed out.

Those delays came despite Phuket Governor Narong Woonciew travelling to Bangkok in person to plea for the national government to finally take action to resolve on the recurring water shortages.

Regardless, Gen Prawit this morning stated that Phuket was a critical province on the southern Andaman coast, but faced water shortage problems almost every year.

“The government has always recognised the importance of this problem. Today, I have ordered the Royal Irrigation Department to find a way to increase the efficiency of pumping water from natural sources to fill the reservoir as much as possible. As for the Provincial Waterworks Authority, it is urged to accelerate the understanding and participation of the people in the Phang Nga area in the construction of the water supply system to Phuket in order for the operation to benefit all parties concerned,” he said.

“In addition, the National Water Resources Office (ONWR) is to direct, monitor and expedite the operations of all units and report to the National Water Resources Committee periodically with water saving measures, guidelines for wastewater reuse and plans to develop water reservoirs in Phang Nga and Phuket provinces to support adequate water use in the future,” Deputy PM Prawit said.

“The Phuket Provincial Administrative Organisation [PPAO, or OrBorJor] is to expedite the preparation of a freshwater production system from brackish water and seawater, whereby the ONWR will consider proposing support for the mid-year budget of 2021 from the Bureau of the Budget as well,” Deputy PM Prawit concluded.