PHUKET: Experts at the Phuket Marine Biological Centre (PMBC) have started a research project to investigate whether rising sea temperatures are a major factor in the recent spate of turtle nests laid out of their usual egg-laying season. 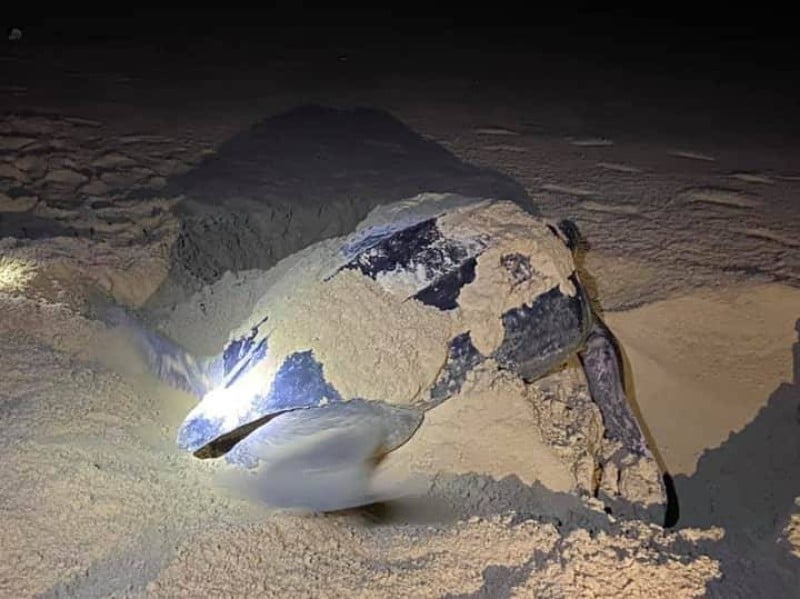 The project comes as a large leatherback turtle came ashore a beach and laid a nest of 103 eggs in the Khao Lampi – Hat Thai Mueang National Park last night (July 28) – the fourth such turtle nest laid in the area in the past month.

The turtle came ashore at about 9:50pm, confirmed Park Chief Haritchai Rittichuay, who was called to the scene.

“She spent about two hours laying the eggs, then returned to the ocean,” he noted.

Of the 103 eggs laid, 87 of them were capable of producing offspring while the other 16 were infertile, Mr Haritchai said.

After careful consideration, a decision was made to move the eggs from the nest to a safer beach inside the national park, where the nest will be sheltered by protective barriers and be watched over by park officers, Mr Haritchai explained.

“Big waves were reaching high up the beach where the nest was laid so we had to move quickly to make sure the eggs were not affected. We did not want to lose any of them,” he said.

“If anyone sees a turtle laying eggs on a beach, please call us at 076-679134 so we can quickly go to protect the eggs and take care of them,” Mr Haritchai added.

Phuket Marine Biological Centre (PMBC) Chief Kongkiat Kittiwatanawong pointed out that the nest laid last night was the fourth such nest laid by turtles in their “off-season”.

“Turtles usually lay eggs from November through March, but it is July now and turtles are still laying eggs,” he said.

“It is hard to tell, but right now we believe that rising sea water temperatures may have affected the turtles, tricking their biological clock into thinking that it is still the right time of year to be laying eggs. Sea water temperatures are higher this year,” he added.

A team of researchers have been tasked with looking into any correlation between the two, he noted.

“I want to look at the number of turtle eggs laid and the correlating sea water temperatures along the Andaman coast areas of Phang Nga and Phuket for last year and compare that data with this year. That will give us a better understanding of what is happening,” Dr Kongkiat said.

“It is possible that the mother has not laid eggs before. An experienced turtle would not lay eggs where the waves flood up to the nest. They also prefer to lay eggs where there is less activity on the beach and fewer fishing boats in the area,” he said.

Officers at the  Khao Lampi – Hat Thai Mueang National Park found another nest of leatherback turtle eggs on Sunday (July 26) about two kilometers south of Khao Nayak, near Khao Lak, where yet another nest was found on July 7.

As the nest found on Sunday was deemed not under threat by the strong southwest monsoon surf, the officers covered the nest back up and built a protective enclosure around it to protect it from predators.

The leatherback turtle nest found on the beach in front of Khao Nayak, the “resident reef” at Khao Lak, on July 7, contained nearly 100 fertilised eggs that are expected to produce younglings.

Just one week before that nest was found, a nest of leatherback turtle eggs were found on Thai Mueang Beach that was believed to have been laid by the same turtle that came ashore at Mai Khao Beach just days earlier.