PHUKET: The push to vaccinate as many people as possible before the July 1 deadline next Thursday took another hit yesterday (June 24) as foreigners were turned away from vaccination centres after presenting themselves for their second injection as instructed by Phuket health officials. Dr Withita Jaeng-iam, Deputy Director of Primary Care at Vachira Phuket Hospital, is confident that Phuket will be able to vaccinate 70% of the island’s population by next Thursday (July 1). Photo: Eakkapop Thongtub 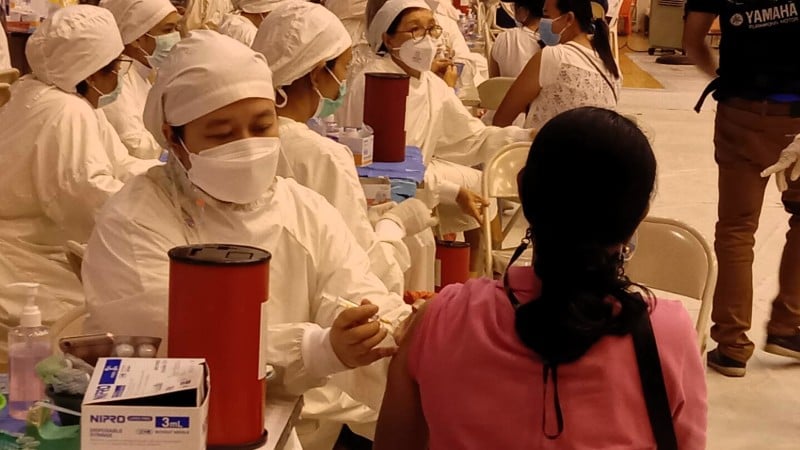 While foreigners were being turned away at the vaccination centre set up at the Central Phuket shopping mall, The Phuket News was receiving confirmed reports of foreigners receiving their vaccination injections as previously organised at other centres, including at the Jungceylon shopping center in Patong and at the Angsana Laguna Phuket resort in Bang Tao, Cherng Talay.

The Phuket News also confirmed that some foreigners did receive their second vaccination injection at the Central Phuket centre earlier in the day yesterday, in the morning, before foreigners at about midday were told to come back later “at their scheduled appointment”.

“Check your SMS” one staffer at the processing tables set up in the Central Phuket car park told foreigners arriving yesterday afternoon.

However, many foreigners have confirmed that they have not received any SMS messages at all from the ‘Phuket Must Win’ website ‒ the only way for anyone in Phuket to register to be vaccinated for a state-provided COVID vaccination. The foreigners became aware of their scheduled vaccination appointment only by repeatedly rechecking the website themselves.

Among those presenting themselves for vaccination yesterday were those who were told specifically by health officials on June 3 to ignore the SMS and registration information on the Phuket Must Win website. Many of those foreigners had June 24 as their next vaccination appointment handwritten on their vaccination injection ‘receipt’ provided to them on June 3.

Phuket health officials as of today (June 25) have still not provided any notice to foreigners that their vaccination injection appointments may have been rescheduled.

So far, unlike repeated announcements for different groups of Thai nationals wanting to be vaccinated, Phuket health officials have posted only one sentence announcing that registration of foreigners without work permits is now open through the Phuket Must Win website.

That was on Thursday last week (June 17) ‒ 10 days after the Ministry of Foreign Affairs announced in Bangkok that all foreigners in Thailand ‒ especially including expats and retirees ‒ would be able to register to receive a state-provided vaccine from June 7.

Of note, Phuket officials have never recognised that foreigners would ever be able to register in person at a hospital where their records are being kept, as announced on May 21 by Natapanu Nopakun, Deputy Director-General of the Department of Information and Deputy Spokesman of the Foreign Affairs Ministry.

Meanwhile, private organisations, such as Bangkok Hospital Phuket, have posted their own notices to inform foreigners that they may now register to be vaccinated.

While Deputy Prime Minister Supattanapong Punmeechaow and other top-ranking officials, including Tourism Authority of Thailand (TAT) Governor Yuthasak Supasorn and Tourism and Sports Minister Phiphat Ratchakitprakarn are being told that “Phuket is ready” to reopen to receiving vaccinated foreign tourists from next Thursday, Phuket officials at the same time are still reporting that that the number of people registered to be vaccinated has not even reached the target set in order to achieve herd immunity against the COVID virus.

According to the latest mass vaccination update reported by the Phuket Provincial Public Health Office (PPHO) this morning (June 25), as of yesterday only 419,397 people in Phuket have registered to be vaccinated.

That number is more than 46,000 people short of the target 466,587, which has long been held as the number representing 70% of the island’s resident population ‒ and held as the people needed to be vaccinated in order to achieve herd immunity against at least the initial strain of COVID-19, for which the island is being vaccinated.

In local and even national officials announcing the Phuket Sandbox model last month, having 70% of the island’s population vaccinated for COVID-19 was described as a critical factor without which the reopening to foreign tourists could not go ahead. Over the past week, that factor is no longer being recognised by any officials.

At the main Phuket COVID vaccination centre at the Indoor Sports Stadium in Saphan Hin, Dr Withita Jaeng-iam, Deputy Director of Primary Care at Vachira Phuket Hospital, told The Phuket News yesterday (June 24) that the current focus of the mass-vaccination is to provide second vaccination injections

“Right now we are providing the second injection of the Sinovac vaccine at all [vaccination] stations,” Dr Withita said.

In addition to the Indoor Sports Stadium at Saphan Hin, the Jungceylon shopping mall in Patong, the Central Phuket shopping mall in Kathu and Angsana Laguna Phuket resort in Bang Tao, Cherng Talay, vaccinations are also being provided at Phuket International Airport and at the Phuket Orchid Resort and Spa Hotel in Karon.

“For the new batch of AstraZeneca, we will keep providing that to people too,” she added.

Dr Withita is confident Phuket will vaccinate 70% of the island’s population before next Thursday.