PHUKET: Heavy machinery was brought to Layan Beach today (Sept 30) to knock down the last remaining illegal beachfront buildings on some 178 rai of state land, altogether estimated to be worth over B10 billion. 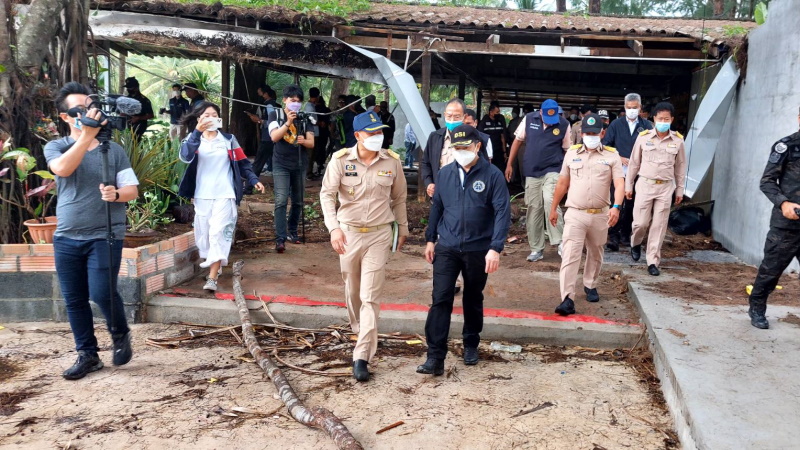 The Department of Special Investigations (DSI) originally served eviction notices in 2017 after the Supreme Court ruled that the occupiers were illegally encroaching on state land. Several ‘final warnings had been made since then, with the last eviction notice served on Sept 12, 2022.

The encroachers were ordered to vacate the plots by Sept 30 or else officials would remove their buildings for them. Contrary to the previous warnings, this time officials were serious.

Traiyarit Temhiwong, Director-General of the DSI, arrived in Phuket to witness in person the beginning of the demolition process. He was accompanied by Phuket Governor Narong Woonciew, Vice Governor Anuphap Rodkwan Yodrabam and a slew of officials from local government agencies as well as the Office of the Auditor-General.

Speaking on the case, Director of Phuket Legal Execution Office Paween Kumar said that the owners of the buildings had been given time to remove their property from the state land voluntarily.

"The eviction notices were posted on Sept 12, 2022, ordering the occupiers to vacate the land within 15 days. The notices said we would be coming to check the area on Sept 30, and we came in accordance with the notices to demolish [the illegal buildings]. There are four separate sub-cases in this case and six separate plaintiffs who tried to appeal but lost in court,” Mr Paween said.

It was announced that the demolition would be finished within Sept 30. Any people found doing business or living on the land after that will be charged with trespassing.

“We focus on dismantling all the structures so that there are no people left [encroaching on the land],” he added.

Mr Traiyarit of the DSI stressed that the provincial Office of the Ombudsman sent a representative to oversee the demolition process.

"The authorities are entering the demolition process. He came in person as an observer to encourage the officers doing their job to recover valuable natural resources,” Mr Traiyarit said.

“If the average price of the land is B1 million baht per square wah and the area in total is 178 rai, the value of the land to be returned to the nation is about B50bn. It is the property of the nation as a whole and should not belong to anyone seeking illegal benefits from these 178 rai,” he added.

Mr Traiyarit emphasised that the DSI “accepts all the special cases”, just as its name presupposes.

“Here is a backhoe demolishing a building right now. The structure is built with a lot of concrete, but no piling makes the demolition very easy. I think in about a month there will be a beautiful clean beach here,” Mr Traiyarit said.

“The local Government will organise everything for people to use this land together for the joint benefit of the community and the society. I believe that the strong integration of law enforcement efforts as well as the cooperation and strength of all the relevant agencies guarantee nobody dares to encroach on this land [again]. If it happens, serious legal action will be taken then," Mr Traiyarit added.

Phuket beachfront businesses at Layan, Leypang ordered: ‘Get out, or be demolished’ (Click here)