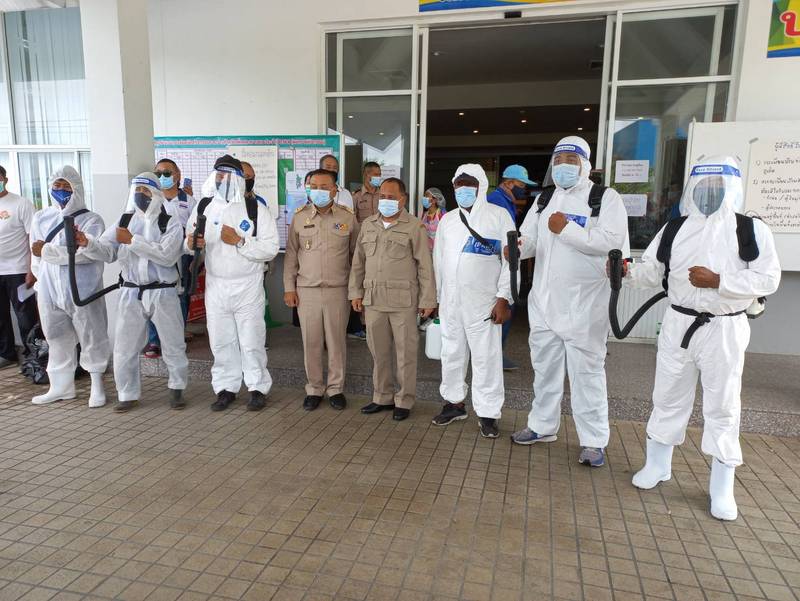 Dr Kusak revealed the news at 11am today (Apr 7) at the Indoor Sports Stadium in Saphan Hin while Ministry of Public Health Deputy Permanent Secretary Dr Yongyot Thammawut was conducting an inspection visit of the mass-vaccination campaign underway there.

Referring to the people infected as case numbers, Dr Kusak explained that Case 1 was a 29-year-old woman PR employee at an entertainment venue in Bangkok’s Thonglor District who had travelled to Phuket on holiday.

Dr Kusak then repeated the same information released in a notice issued this morning explaining the woman’s movements in Phuket after arriving from Bangkok, provided no further details.

“She is now receiving treatment in a private hospital,” was all Dr Kusak would add.

“The 29-year-ol PR employee from Thonglor is receiving medical treatment at a private hospital, and the remaining seven infected people are under medical care at Vachira Phuket Hospital,” Dr Kusak noted.

At this stage 10 people were considered to have had high-risk exposure to the people now confirmed as infected, he said.

“At this stage, health officers are testing and questioning every person who was involved in the parties and asking them to self-quarantine,” he said.

The “parties” referred to three parties held in Phuket last weekend, organised by Kolour beachside. One of the parties was held at the Shelter Phuket Dance & Night Club in Patong, another was held at Cafe Del Mar Phuket in Kamala, and the third was held at the Illuzion nightclub on Bangla Rd.

Dr Kusak urged people to pay heed only to clear information provided by the ongoing investigation into the infections. More details will be announced to the public later, he added.

Also present at Saphan Hin this morning, Phuket Governor Narong Woonciew said, “For the new cases, every sector in Phuket has worked together on protecting themselves and our people.

“I expect that we can control the outbreak. For now, please do not panic,” he said.

Up until yesterday Phuket had enjoyed 103 days without any new COVID-19 infections.

The eight new infections bring to 204 the total number of people in Phuket confirmed as infected with COVID-19 since the outbreak began.

So far only three people in Phuket have died as a result of contracting the disease.