marineanimalsnatural-resourcesenvironment
By The Phuket News 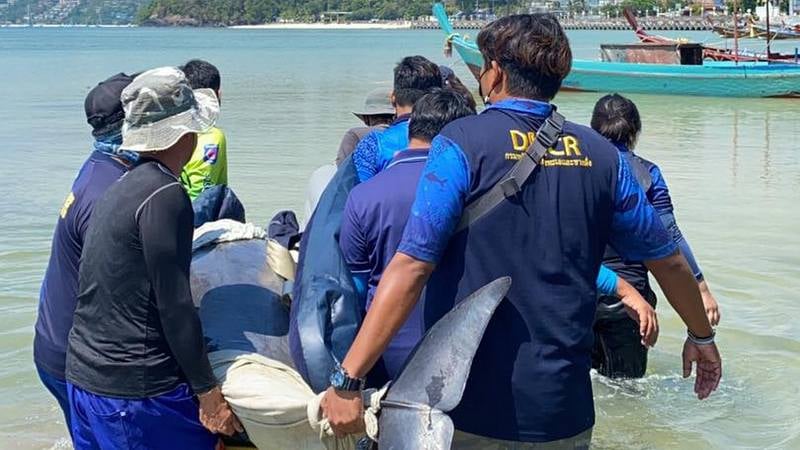 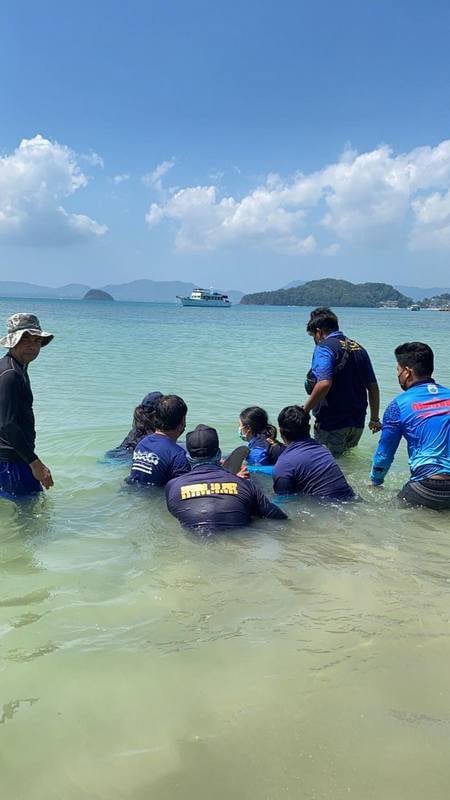 DMCR officers are still keeping an eye out for the dolphin, just in case. Photo: DMCR

The dolphin taken into care and brought ashore last Friday was not one of the ‘mother and son’ dolphins DMCR officers had been looking for that day, Dr Patcharaporn Kaewmong, a marine biologist at PMBC, explained to The Phuket News.

The ‘mother and son’ dolphins that the marine life experts were looking for were both striped dolphins. DMCR officers have yet to locate the two dolphins after they were last seen off Pa Khlok last Thursday.

“The dolphin we found looked tired and moved more slowly than normal, so we brought it to the PMBC,” Dr Patcharaporn explained.

“After we monitored it for a while, it seemed to be healthier, so we released it to the sea later that day,” she added.

“Then, later that same day, we were informed that a dolphin had been found stranded on mud in the Klong Mudong area in Chalong, and we went to examine it,” Dr Patcharaporn continued.

The PMBC team found that it was the same female bottlenose they had released just hours earlier. They checked her health and then again released her into the sea, but were destined to see the dolphin again soon.

“Later after that, on the same day, we were informed again that local people had found a dolphin near Boat Lagoon in Koh Kaew, north of Phuket Town. We rushed to Boat Lagoon and saw it was the same dolphin.

“We brought the dolphin back to the PMBC, and after we checked and confirmed that she was healthy enough to be released again, we released her back to the sea.

“We believe that the dolphin had become separated from her group and she was unable to find them again,” Dr Patcharaporn explained.

“We will keep an eye out for this dolphin, just in case she returns and needs help again,” Dr Patcharaporn concluded.