PHUKET: The campaign recently founded by a Phuket expat to help the noodle vendor who was shot and paralysed on Bangla Road by a drunken off duty policeman has raised almost B400,000 in just one week.

crimeviolencepatong
By The Phuket News 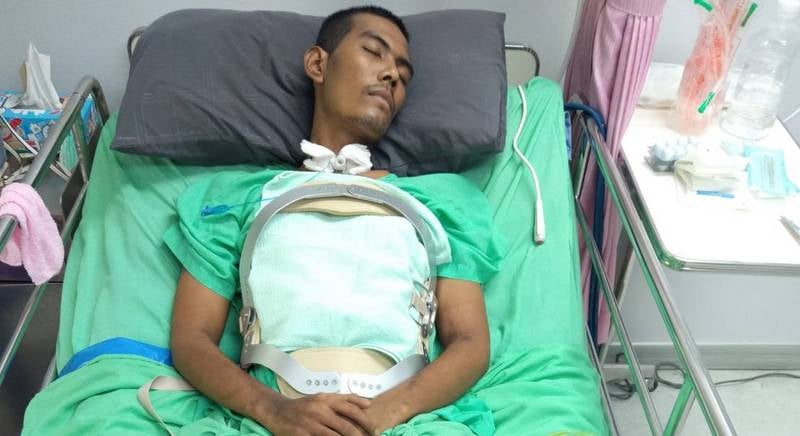 Mr Aroon Thongplab is currently in hospital receiving ongoing care after being shot and paralysed by a drunken off duty Phuket police officer on Bangla Rd, Patong in February. Photo: Eric Smulders.

Mr Aroon Thongplab, who is married with two young children, was shot by Cpl Pornthep Channarong on Patong’s main nightlife entertainment street in the early hours of Feb 23.

Pornthep’s errant shot hit Mr Aroon’s spine and subsequently paralysed him. He has been receiving ongoing care in hospital ever since.

Phuket resident Eric Smulders was so moved with the plight of Mr Aroon, 25, that he founded a donation drive in conjunction with AC Legal Advisors to assist him and his family.

The site went live on May 14 and as of last Friday (May 21) had raised B394,907.97 from a total of 50 donations predominantly from the expat community, many of whom chose to remain anonymous.

The only compensation provided to Mr Aroon and his family by the Royal Thai Police thus far is B20,000, received in February. Mr Aroon’s wife Kulthida Chananan has sought further assistance but nothing has been forthcoming.

“This man’s life and that of his wonderful family have been destroyed and he will need help for a long time,” Mr Smulders told The Phuket News on May 14.

“The family needs to rent a larger room as where they currently stay is just too small. They also need to pay for medical supplies, diapers, regular nursing care, and more.”

Mr Smulders presently estimates that the family, the couple have one young daughter and a baby boy, will need at least B25,000 per month, much of that just for rent.

Pornthep, who was stripped of his rank and dismissed from the police force following the unprovoked attack, has been charged with attempted murder, carrying a firearm in a public area without necessary reason, and firing a weapon in a public area.

On Wednesday (May 19) he was denied the right to post bail by The Phuket Provincial Court.

“As Pornthep had confessed to what he did, the court said they had no reason to release him,” commented Bangkok-based lawyer Kerdphol Kaewkerd, who is providing free legal assistance to Mrs Kulthida.

“Pornthep told the court that he wanted to be temporarily released so that he could find ways to raise money to provide financial relief to Mr Aroon’s family,” added Mr Kerdphol.

“He also told the court that he wanted to return guns and other equipment which he kept in his house to the Royal Thai Police. His parents could not find them, so he wanted to do it himself.”

The court, however, denied his request and will hear witness testimonies and examine the defendant’s confession on June 28.

The donation drive to assist Mr Aroon and his family is ongoing. Anyone wishing to make a contribution can do so directly to:

“After you make the transfer please inform me via email tum@aclegaladvisors.com, by LINE ID tum_jaruwan or by mobile: 081 8931647,” Ms Jaruwan noted.