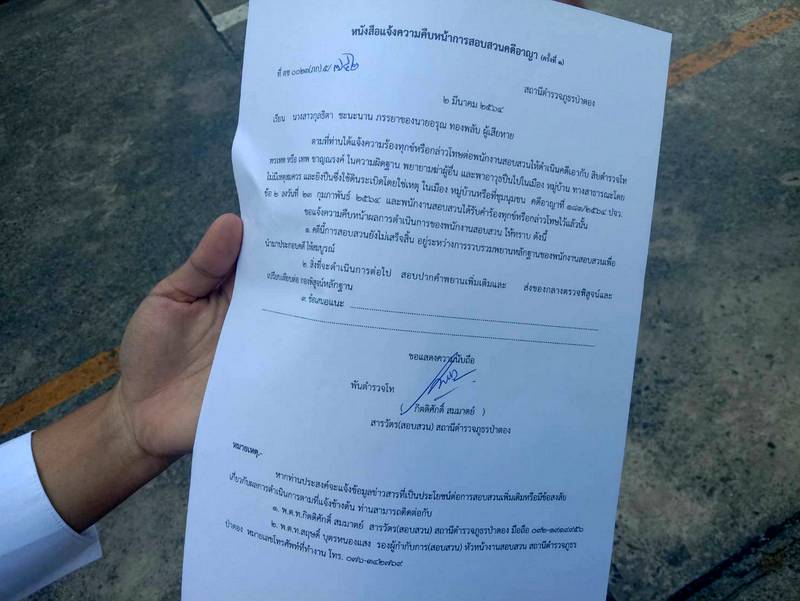 The official police progress report on the investigation, explaining only that police were still compiling evidence. Photo: Eakkapop Thongtub

“At this stage, officers from the Phuket office of the Ministry of Justice have already come to discuss this with us,” Col Sujin told reporters at Patong Police Station this morning (Mar 2).

“If the victim’s family asks for any compensation or help, we will file a request to the Ministry of Justice Phuket office so they can provide help and safety for them,” he said.

The officer arrested for the shooting, Pornthep Channarong (who was a corporal of the Phuket Provincial Police at the time of the shooting), was quickly stripped of his rank and dismissed from the Royal Thai Police.

He now faces an attempted murder charge for shooting 25-year-old Mr Aroon in the stomach just before 6am last Tuesday while Mr Aroon was walking along the street after collecting a noodle bowl from a customer.

Col Sujin today said that he had been informed by the case investigator, Lt Col Kittisak Sommart, that officers were still in the process of compiling evidence and witness statements in order to formally press charges against Pornthep.

“The next step is to question more witnesses and send the evidence collected to the Central Police Forensic Science Division,” he said.

“I assure that we will work straightforwardly and decisively on this case. We will be fair to both sides. We will do our best for this case and will coordinate with relevant officers for helping the family,” Col Sujin said.

Mr Kerdphol said that at this stage his visit “is just to talk with police and follow up the case”.

“Right now, police are doing their job, I did not come to interfere in their work. I have come to discuss the issues that are worrying Mr Aroon’s family,” he said.

A key concern was the Phuket Provincial Court approving Pornthep to be released on B600,00 bail, Mr Kerdphol said.

Ms Kulthida, and another lawyer who is volunteering his services, last Saturday (Feb 25) filed an appeal to the court to reconsider its decision.

“The worrying issue is what we can do if the Phuket Provincial Court continues to approve the suspect to post bail,” Mr Kerdphol said.

“The bail approval is now under the court’s consideration again, even though the investigation police and the victim’s family have already filed an appeal with the court to refuse the police corporal charged for the shooting to post bail,” he added.

“At this stage the relatives of the suspect have not presented to the court the surety to post bail. If there is the second request for detention, I want police to again ask for the court to refuse bail.

“The victim’s family is worried about their safety, of themselves and of witnesses. If the suspect posts bail, they are afraid he will threaten the witnesses to change their statements about the incident,” Mr Kerdphol said.

Regarding the police offer to help, Mr Kerdphol explained, “At this stage, Mr Aroon’s condition is still stable. Doctors are treating his lungs and kidneys. Doctors will not operate on his damaged spine [which the bullet hit] because they have to keep him alive as their priority.

“If relatives want to transfer him to a private hospital or a hospital in Bangkok, the Patong Police will file a request to the Royal Thai Police to give assistance,” he said.

However, he added, “Doctors have not given any comment whether it is safe for Mr Aroon to be transferred [to any other hospital].”

“In case Mr Aroon does survive, but cannot live his life like before, how do we help him and other members of his family – his wife, sick mother and two children?” Mr Kerdphol posed.

“If police can ensure that they can take care of their safety, they will go back to selling noodles,” he said.

“I feel sad for Mr Aroon’s two children [a 4-year-old daughter and a 4-month-old son]. How can we help them, if Mr Aroon becomes disabled and his wife cannot work or make enough income for their family?

“They need a huge amount of funds, for living costs, the children’s education and for legal processes involved in this case,” Mr Kerdphol.

“I may hold a fundraising auction for my gold amulets to help them,” he concluded.