The devil is in the detail at Les Diables

The devil is in the detail at Les Diables

Baking is an art. A patisserie chef needs a steady hand, a creativity that extends beyond the recipe book and more than a pinch of patience. It’s an ex­act science too; a careful bal­ance of chemical reactions. To these challenges, Peter Web­ber, owner and chef at Les Diables, has risen perfectly, just like his cakes. 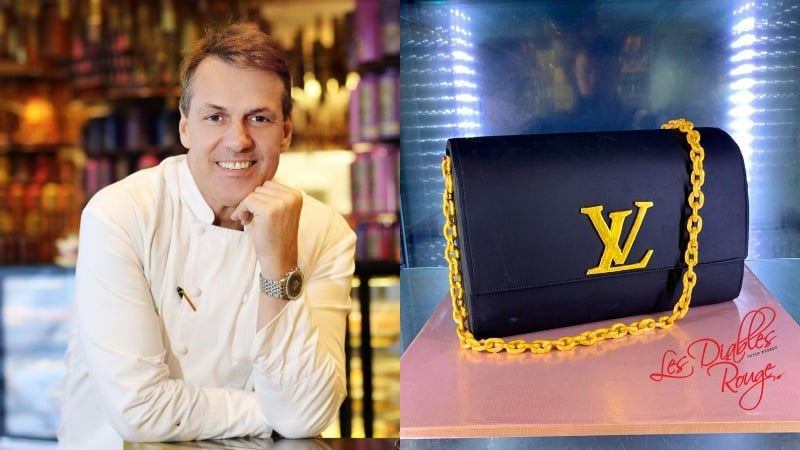 The man behind Les Diables (left). One of Peter's hyper-realistic creations (right).

Peter’s patisserie, bar and restaurant sits on the boardwalk at Phuket Boat Lagoon, looking out at a peaceful ma­rina of gently bobbing superyachts.

The decor inside is reminiscent of a traditional English tea room. Hand-illustrated fabrics depicting quaint country homes deck the windows and chairs, and there’s polished silverware stacked on the sideboard. Decorated in deep blues, golds and yellows, it feels sophisticated but comfortable and welcoming at the same time.

A tiered sugar model of Queen Mary’s wedding cake takes pride of place in a glass case by the entrance, and the detail in the carved crests, flowers and figures is enough to have Mary Berry hanging up her oven mitts for good.

Peter’s foray into the world of the sweet and the baked has taken him to The Savoy in London, the Hotel Okura Tokyo, the Hyatt Regency Belgrade and even the Mandarin Oriental, Bangkok where he spent 15 happy, hectic years as head patisserie chef overseeing some 70 members of staff. His anecdotes of his time at these world-class establishments are wonderfully British. Think apple crumble-related disasters at a state din­ner for Queen Elizabeth II and whipping up honey parfaits for Princess Diana.

In Phuket, Peter has built up a repu­tation for custom, almost hyper-realistic cakes for all occasions. He’s yet to turn down an order, taking on whatever chal­lenging, risqué or downright bizarre re­quests his ambitious, sometimes blush­ing, customers throw his way.

Yachts, designer handbags, unicorns, guitars, snooker tables, boxing rings, action he­roes, supercars, helicopters, elephants and what can only be described in this family paper as ‘intimate’ cakes fit for a hen do are just some of the edible crea­tions to have graced Peter’s display case over the years.

A recent relaunch of Les Diables has seen the breakfast and lunch menus be­come more bakery-orientated – salmon spring rolls, duck and hoisin tortillas, quiches and pies of the day – whilst holding onto customer favourites, such as salmon cheesecake, salmon flor­entine and confit of duck.

Peter also continues to serve up a mean Sunday roast and a charming afternoon tea while keeping his bar and dessert dis­play case continually stocked up. (The chocolate fudge cake is a Class Act Me­dia favourite that has editors fighting over the last slice. Rich but never heavy, soft in the middle with chocolate shards providing a crisp crunch on top.)

There’s a sense that Peter has hit his stride at Les Diables. While the heady days in the kitchens and lounges of the Oriental, serving the royal and aristocratic, are certainly memorable ones, the virtues of going solo are found in time spent interacting freely with customers and honing in on the artistry baking he does so well.

Whatever corner of the world Peter’s career takes him to next, one thing’s for sure: it’s going to be tasty.