PHUKET: Parasail operators at Kata and Karon beaches will continue their self-imposed ban until they have cleared a full safety review and training, while officials have ordered all parasail operators to use “lockable clips” to hold people in the harnesses while up to 100 metres in the air. 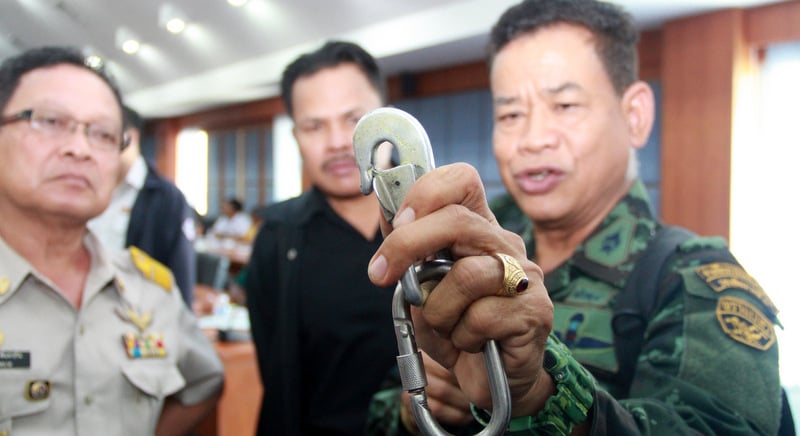 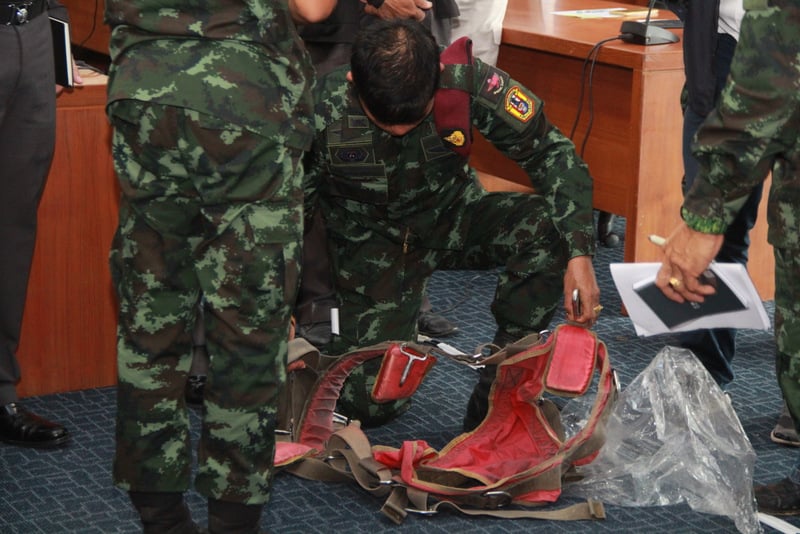 Maj Prasert, Chief of Special Warfare at Sichon Camp, Royal Army Region 4 in Nakhon Sri Thammarat, shows how the clip on the harness Australian tourist Roger Hussey was wearing is easily opened simply by pressing on it. Photo: Tanyaluk Sakoot 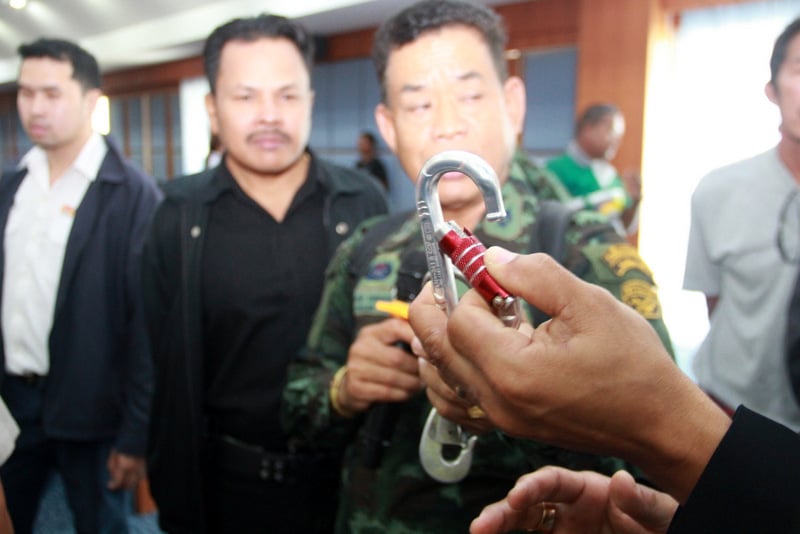 Maj Prasert, Chief of Special Warfare at Sichon Camp, Royal Army Region 4 in Nakhon Sri Thammarat, urged Phuket parasail operators to use clips that used fasteners to prevent them from opening simply by pressing on them. Photo: Tanyaluk Sakoot

The safety review was ordered in after death of 70-year-old Australian tourist Roger Hussey in a fall at Kata Beach last Wednesday (July 12) made international headlines.

Mr Hussey plunged some 70 metres into the water below at Kata Beach after his harness somehow became unclipped from the parasail suspension lines.

The parasail rider, Rungroj Rakcheep, and the speedboat owner and driver, Montiean Jandang, were both charged with recklessness causing death over the incident. (See story here.)

Gov Norraphat today reiterated that the “ban” at Kata and Karon was elective on the part of the parasail operators.

“I don’t think they will be banned, they just have to follow the safety rules. We have only ‘asked’ them to not provide rides for now,” Governor Norraphat told The Phuket News.

Winai Chitchiew, who serves as Kamnan (Subdistrict Headman) for Kata-Karon and today represented the local parasail operators, noted the the self-imposed ban may last as long as three weeks.

“Any safety guidelines drawn up as the result of this review and training will be handed down to the Kata and Karon parasail operators to observe,” Mr Winai assured.

“I will write up the rules and standards and submit them to the Army as quickly as possible so they can ratify them to become regulations,” he explained.

“All parasail operators at Kata and Karon must carry out full checks of their equipment, and upgrade them where necessary. Also, the Army must give their approval. This may take up to three weeks. During that time the local operators have agreed not to provide any parasail rides,” he added.

Maj Prasert made it clear that parasail operators should use harness clips that include cloth fasteners that prevent clips from opening simply by pressing on the latches.

To illustrate his point, he inspected the harness Mr Hussey was wearing when he fell some 70m into the water at Kata beach last Wednesday. He showed how the clips on that harness could be opened simply by pressing on them.

This afternoon, parasail operators at all major Phuket beaches were to present to officials from the Phuket Marine Office a full list of all the boats used for providing parasail services.

The list of operators to be included are those working at Patong, Kata, Karon, Kamala, Nai Thon, Bang Tao beaches and those working at any locations within Rawai subdistrict, which includes Coral Island and the two Racha islands to the south of Phuket.

Asked what other checks would be carried out by the Phuket Marine Office, Phuket Marine Chief Surat Sirisaiyad declined to comment.

“Next, the experts from Royal Army Region 4 will report to me on the safety checks they have conducted; that will take time,” Governor Norraphat told The Phuket News.

Asked whether any deadline had been set to complete all the checks, Governor Norraphat said, “We can’t confirm yet. All parasail equipment must be approved by Royal Thai Army Region 4, but because it will take time to check all the equipment, to buy new equipment and check the boats, we have to be careful and have to be effective in working together.”

“Also, we have yet to draft a standard health form for customers wanting to take a parasail ride. We must talk about that further,” he added.