SURFING: Despite initially having to contend with rather inclement weather conditions, the Thailand Surfing Championship 2021 was hosted at Nai Harn beach in Rawai last week, attracting over 170 surfers from all over Thailand. 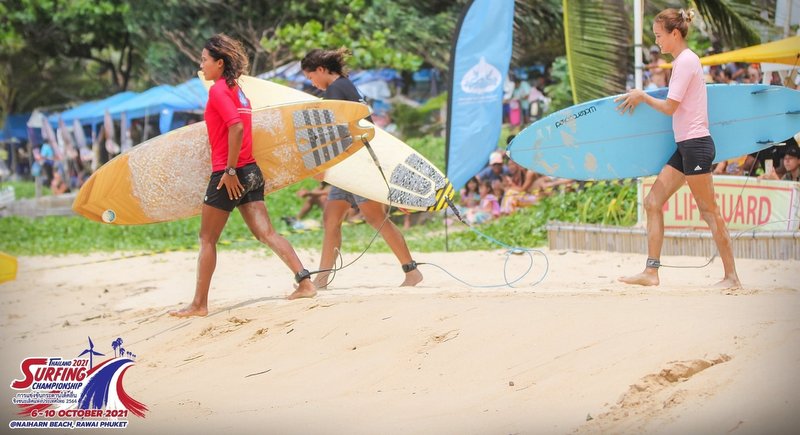 The competition ran from Oct 6-10 and was organised by the Thailand Surfing Federation and the Surfing Association of Thailand. The first two days of competition experienced heavy rainfall and strong winds which made things extremely challenging for the participants, although conditions did improve into the weekend and for Sunday’s final.

It was the first official competition since the outbreak of COVID-19 last year and was carried out while strictly adhering to stipulated health and safety measures. Spectators were limited although a live feed via Facebook allowed eager fans to follow from the comfort of their homes.

Competition highlights included local favourite Annissa Flynn winning the women’s short and long board categories. Annissa is a Thai national team athlete who won a silver medal in the women’s short board competition at the 2019 SEA Games and who is a two-time flow board world champion.

In an interview with the organisers after her victories, Annissa thanked the fans for coming out and cheering her and her fellow surfers on, adding that the strong waves made things challenging but she tried her best.

Jamie Smith won the men’s short board contest after defeating SEA Games bronze medalist Henry Chapman with a score of 12.70 to 10.80.

Teerayut Phetsura overcame the challenge of Pattana Kenkhuntod to win the men’s long board category.

In the under 14s youth category, Natthakron Sae-Yew won the male competition and Pennapa Khotchadet triumphed in the female catgeory.

“This past year has been very challenging following the outbreak of COVID-19 and many races had to be cancelled,” commented Chanin Aiyarak, President of the Surfing Association of Thailand.

“Athletes have been unable to compete nationally, let alone in overseas competition so it was crucial that once the restrictions on sports activities were relaxed that we managed to organise this event,” he added.

“We strictly followed the provincial health and safety measures and provided a live broadcast to limit spectators at the venue. This was very warmly received by surfing fans as we witnesed a large audience tuning in,” Mr Chanin said.

The results were as follows:

The Surfing Association of Thailand is sponsored by Quiksilver Thailand, Roxy Thailand and The Coral Lounge Thailand.

All competition photo albums are available at https://www.facebook.com/surfingthailand/photos/