PHUKET: Police have shelved an investigation into the body of a woman found lodged in a pipe at a waterway behind Tha Reua Shrine just south of the Heroines Monument nearly a year ago due to lack of leads. 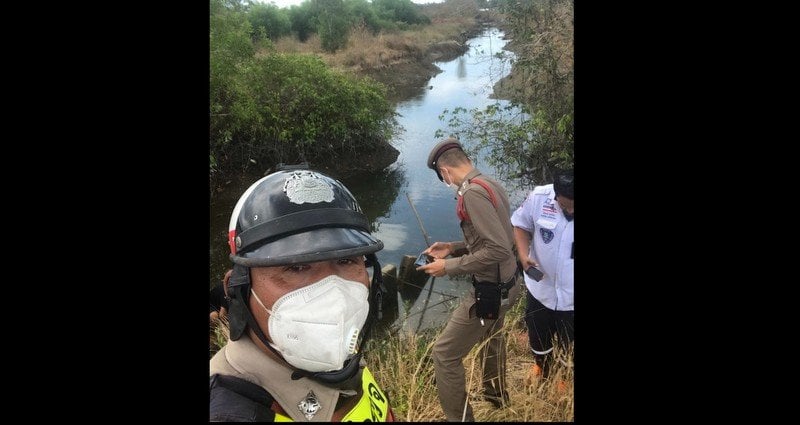 Police and rescue workers at the site where the woman’s body was found, lodged in a water pipe, in March last year. Photo: Eakkapop Thongtub

Police were called to the scene at about 11am on Mar 8 last year to be shown the body of the woman, which was stuck in a water pipe in Klong Huatha along the shrimp ponds.

Capt Kraisorn Boonprasob of Thalang Police reported that, on initial examination, it appeared the body had been there for around 15 days. The body was bloated and had partially disintegrated.

A black bra was tied to the neck and the shirt worn had been torn apart.

The body was taken to Thalang Hospital where doctors discovered that the body’s skull was broken. Initial estimates suggested that the woman may have been 40 years-old and just over five feet tall.

The body was later transferred to Vachira Phuket Hospital for in-depth examination in order to find the cause of death.

“Police still have not yet been able to identify the woman whose body was found,” Capt Kraisorn Boonprasob of Thalang Police told The Phuket News today (Feb 5).

“In addition to checking the missing persons database through the police’s notification system, we coordinated with local community leaders in the Thalang area to enquire if anyone may have known the woman,” he said.

“But officers have not received any information that could identify the woman,” he added.

“Police believe that the woman was an alien [migrant worker],” Capt Kraisorn said.

“With no further leads, police have had no choice but to stop the investigation into this case until more information about the deceased comes to light,” he said.

And how many returns on this 5 flight’s Phuket. ...(Read More)

Easy answer - Control the bridge and allow entertainment to re-open. See my proposal in vaccination...(Read More)

So, not only Thai Airways airplanes will arrive to the Phuket, as governor said yesterday. ...(Read More)

Understand that beach encroachers/occupiers of State land are upset and hold on their rights. 'R...(Read More)