PHUKET: More than six months after a Phuket airport taxi driver wiped out six vehicles and killed a motorbike rider whilst driving a tourist from the airport on Thepkrasattri Rd during morning rush hour traffic, the lead police investigator for the case is pretty confident that he will finally hand the case over to the Phuket Prosecutor to proceed with legal action next Tuesday (May 7). 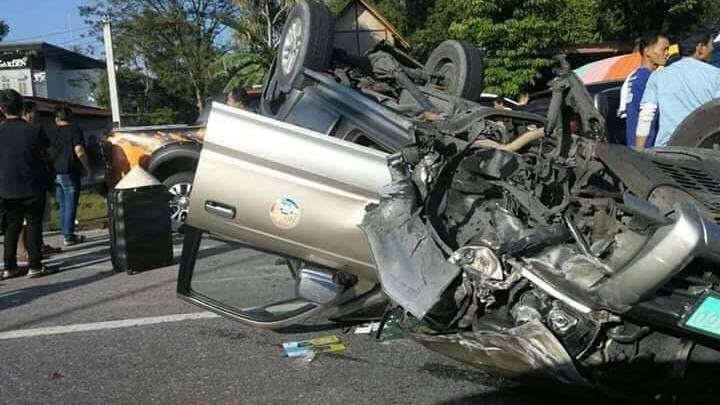 The taxi driver, Marut Puangsombat, 23 years old at the time of the accident, at 8am on Oct 30 last year, was initially charged by police with reckless driving causing death after the wipeout – which killed 40-year-old Phuket resident Mr Anuson Rattanadilok Na Phuket. (See story here.)

Mr Anuson, 40, a Phuket resident, worked at Thalang Hospital, but which position he held was never clarified.

A tourist was in the taxi when the accident happened at 8am, Oct 30, but escaped unharmed, and immediately returned to the airport to leave. (See story here.)

“I will send the case to [the Phuket Public Prosecutor’s Office so that they can] proceed with charges of reckless driving causing death and causing damage to private property on May 7,” Capt Suporn Mueangkai of the Thalang Police assured The Phuket News today (May 2).

“I have the criminal record of the taxi driver already. Now I am concluding the case,” he said.

Capt Suporn did not elaborate on exactly what criminal history taxi driver Marut has.

“This case has been delayed because the case has many victims. I think I can send the case to the court on May 7,” Capt Suporn said later in the conversation with The Phuket News today, somewhat less sure of his initial assertion.

“The taxi driver has not been detained,” Capt Suporn reconfirmed, noting that Marut has been free to continue working as a taxi driver picking up and dropping off tourists at Phuket International Airport during the tourism high season while the investigation into the accident has continued.

“He has cooperated when I have called him for questioning,” Capt Suporn said.

“And I have requested for his commercial driver’s license to be cancelled,” he added.

“I can't remember on which day, but this now depends on the Phuket Land Transportation Office on how to proceed about this,” Capt Suporn noted.

Of note, Praprai Sounkul, Chief Policy Specialist at the Phuket Land Transportation office (PLTO), the government department responsible for issuing general and commercial driver’s licences, has already confirmed to The Phuket News that at this stage his office was powerless to take any action over the incident.

“Both the taxi driver and the family of motorcyclist who died have spoken twice about compensation, but they have not been able to reach a conclusion. I think they must settle the compensation in court,” Capt Supon said.

The Ed's. warning about generalizations was long time overdue. The agenda of some people seems t...(Read More)

Immigration going make it hard on us foreigners again for no reason.i would never invest in Thailand...(Read More)

Huh? A constructed water tower, constructed without 5 copies paperwork in many departments in the pa...(Read More)

Mr Srisuwan seems to be a paid messenger boy in hands of anti democratic factions, just to secure th...(Read More)