PHUKET: While many of the purification ceremonies traditionally conducted as part of the annual Phuket Vegetarian Festival have been banned this year due to health concerns under the ‘new normal’ requirements, fire-walking has been approved and will be conducted during this year’s festival. The Phuket Vegetarian Festival will get underway at sunset next Friday (Oct 16). Photo: The Phuket News / file 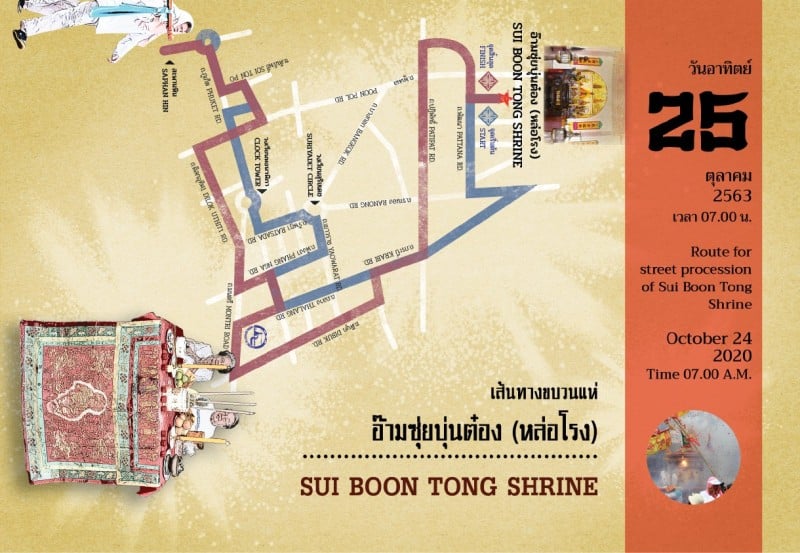 Fire-walking has been specifically included in the official programme of events for the festival produced by the Tourism Authority of Thailand (TAT), released this week. (See below.)

However, the other usual “ablutions of the flesh” ceremonies, including climbing bladed ladders, bathing with hot oil and walking across bridges of nails, remain missing from the official programme.

The Phuket Vegetarian Festival will get underway at sunset Friday this week (Oct 16) with participating Chinese shrines across the island raising Go Teng poles so that the Jade Emperor and the Nine Emperor Gods can descend from the heavens to take part in this year’s festival.

The first street procession for this year’s nine-day festival will begin next Sunday (Oct 18) with the first “Yew Keng” procession held at the Choor Su Gong Shrine, better known as the Naka Shrine, in Wichit, starting at 7:30am.

Devotees and Mah Song spirit mediums will lead the procession from the Choor Su Gong Shrine while many local residents and visitors to the island are expected to line the streets to observe the procession. Devotees observing and taking part will be wearing white to represent the purification of taking part in the festival.

Komart Pankeard, Chief of the Phuket office of the Ministry of Culture, explained last month that street processions can be held this year like they are every year, but all people taking part in the processions must wear face masks all the time.

The ‘Mah Song’ spirit mediums will not have to wear face masks, he noted.

Crowd control measures will be in effect, with people attending the ceremonies required to register their attendence at each event,, he said.

Although not reconfirmed at that meeting last month, Vachira Phuket Hospital Director Dr Chalermpong Sukontapol, who sits on the Phuket Communicable Disease Committee, told Chinese shrine administrators in July that the ‘Mah Song’ spirit mediums are not permitted to walk the streets this year. Instead, they may travel in vehicles as part of the procession, he said.

However, since that announcement more than two months ago, no officials or shrine administrators have clarified that this requirement will remain in place.

The fire-walking purification ceremonies will be held as follows:

The street processions scheduled to be held after Sunday are as follows: