PHUKET: The man who shot two people at a beauty spa south of Phuket Town this morning committed suicide in front of police officers in Saphan Hin Public Park this afternoon (Mar 19). 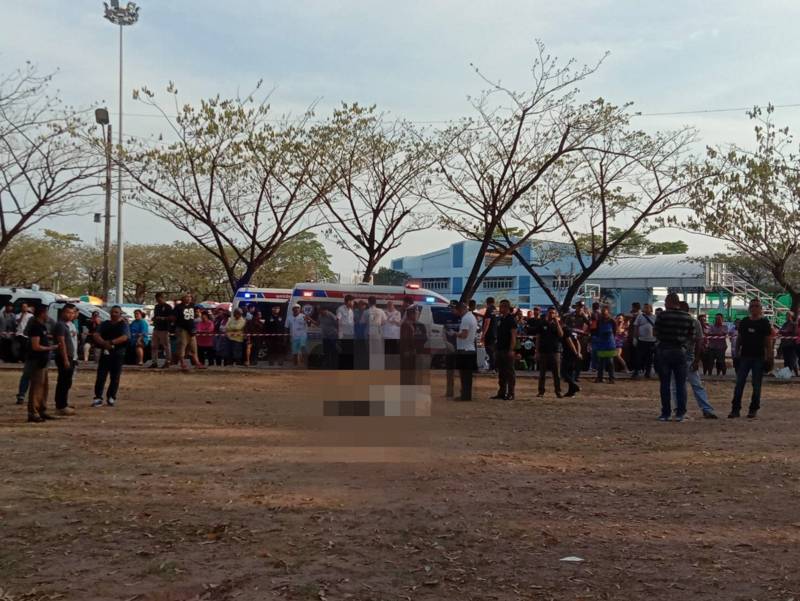 The handgun used by Chana Rotket, 53, from Hat Yai, at the scene at Saphan Hin Public Park this afternoon (Mar 19). Photo: Eakkapop Thongtub

Police confirmed that the man was Chana Rotket*, 53, from Hat Yai. (Not “Mr Somporn” as previously reported by police - see story here.)

Chana refused to comply with police officers’ pleas for him to put his handgun on the ground, and instead shot himself once in the head, Phuket Provincial Police Commander Maj Gen Wisan Panmanee told The Phuket News.

“I ordered police officers to be gentle in speaking with him and in any action taken because there were a lot of children around there,” Gen Wisan said.

“I was afraid that he might take a child hostage. The children could have been in danger,” he added.

The park, located on the fringe of Phuket Town, was busy today as children started enjoying their school holidays following the end of the Thai school year this week.

Chana quickly became the prime suspect for the shootings following initial investigations by police this morning.

Chana worked at the spa, The Beauty Spa on Wirat Hongyok Rd in Wichit, where the shootings took place.

One of the two people he shot was 73-year-old South Korean national Kwanghee Kim, the father of the owner of The Beauty Spa, Mrs Eun Mikim, Capt Ratthanachai Siengsanoh of the Wichit Police explained earlier today.

Mr Kim was shot once in his left chest.

The other person shot this morning was 55-year-old Somsri Chueathonghua, who worked at the spa.

“She was shot in the back and her right arm. Another bullet grazed her right cheek,” Capt Ratthanachai said.

Both Mr Kim and Ms Somsri were taken to Vachira Phuket Hospital.

However, Chana was not at home and the manhunt continued until police later confronted him in the Saphan Hin Public Park, on the grass near the open basketball courts, within earshot of the main car park where the popular food stalls are set up to cater to park goers.

“Officers tried to negotiate with him to surrender, he refused and shot himself dead,” Lt Col Prawit Ang-chuan, Chief Investigator of the Phuket Provincial Police, told The Phuket News.

Police have yet to reveal a motive for the shootings or the suicide.