PHUKET: The Phuket Communicable Disease Committee today (May 11) reported zero new cases of people infected with the COVID-19 coronavirus, after four new cases were reported yesterday (May 10), the first new cases reported in a week. 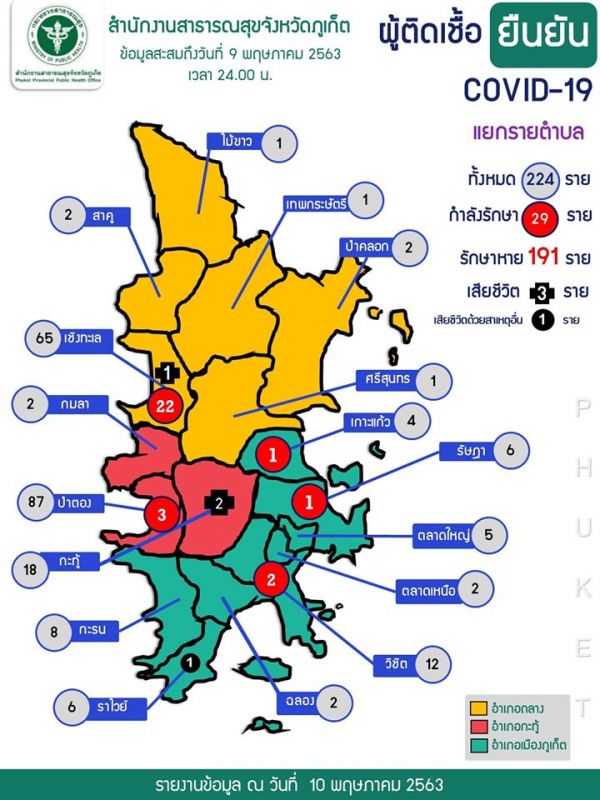 A map showing the locations in Phuket where people have been confirmed as infected with COVID-19, accurate as of midnight Saturday night (May 9). Map: PPHO A map showing the locations of where high-risk patients in Phuket have been identified, accurate as of midnight Saturday night (May 9). Map: PPHO A map showing the locations where people infected with COVID-19 in Phuket are receiving treatment, accurate as of midnight Saturday night (May 9). Map: PPHO

With zero new cases reported today, the total number of people in Phuket officially confirmed as infected with the virus since the outbreak began remains at 224.

According to the Phuket office of the Public Relations Department of Thailand (PR Phuket) this morning, so far 9,763 people had been classified as at risk of contracting COVID-19, an increase of 107 on the 9,656 reported yesterday.

Of those, 9,539 were found not infected with the virus.

PR Phuket this morning also reported that the Phuket Coronavirus disease 2019 (COVID-19) Incident Command Center today noted that in total 5,728 Persons Under Investigation (PUIs) had been identified since the outbreak began.

Of those, 5,659 had been cleared, the PPHO said. The remaining 69 people were still in hospital, comprising 27 people already confirmed as infected and 42 people still waiting for test results, down four from the 46 reported yesterday.

Meanwhile, the Phuket Public Health Office (PPHO) has released updated maps highlighting locations of risk areas on the island, the locations of where cases had been identified and where those confirmed as infected are receiving treatment.

The maps are marked as accurate as of 24:00 May 9. (See updated maps in gallery above.)

The new maps include the four new cases reported yesterday.