Gary Crause is well known in Phuket as a music producer, running his Legend Music company in central Phuket. He also heads up the Phuket Academy of Performing Arts (PAPA) which grooms wannabe pop and rock stars for success. What he is less well known for is his own band Dark Fiber. 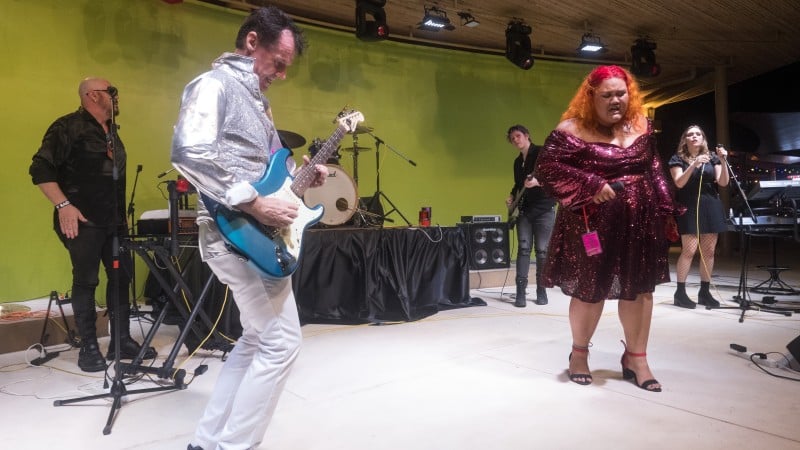 Dark Fiber impress at the Lean On Me festival earlier this year. Photo: Stephane Audiger Rannze Davies delivers her vocal performance at the Lean On Me festival. Photo: Stephane Audiger

The band was first formed several years ago, comprising just Gary, Rob Cooke on guitar and a female vocalist who has long since moved on. Self-described as “Indie Disco”, it was not a performing band, being dedicated solely to the downloaded music market where it had some success with its first 1970s disco-style album, Fibrate.

However, Gary fielded an updated Dark Fiber line up on the day, playing an all-original set, with one of his former PAPA students Rannze Davies, now a PAPA teacher, delivering strong vocals, and his son Blaze on bass. Original Dark Fiber member Rob Cooke contributed some wonderfully gritty guitar, adding a cutting edge to the disco beat.

I thought that Dark Fiber was one of the best bands of the day, if not the best. It may well have shocked other performers that day into realising what Phuket could become if we really wanted it to – a vibrant and creative place where visitors can come and hear new and exciting original songs in English.

Suitably energized, Dark Fiber plunged into the recording studio right after the festival, producing a brand-new album, Disco Tools. This has definite echoes of Depeche Mode, Yazoo and A Flock of Seagulls as well as newer influences like Dua Lipa and The Weekend.

Co-writer and producer Rob Cooke remarks, “Logically, as it’s 10 years later, we went for a very ‘80’s sound this time around.”

Gary Crause added, “We’ve been busy with life and helping others create their music so Dark Fiber was pretty much put on hold. Also we have not really had a consistent line up until the introduction of Rannze on vocals.”

While it contains no profanity, much of the subject matter may bring a blush to the cheeks of the more conservative. “We’ve always tried to make Dark Fiber songs sexy and quite ethereal. This time round we turned that up to 11,” said Gary.

However, the 10-minute Hang Up The Phone (Ode to Doug) stands out as very different. It’s written about the emotional effects a family takes on when they lose someone close through suicide. Rannze remarked, “When I got the demo from Gary to learn the vocal melodies, I could really hear how he was struggling to get the words out. It was all very emotional.”

Dark Fiber may be a band focused on producing downloaded music, but I really hope we’ll see them out of the studio and back on a stage in Phuket again somewhere soon. If they do, I’ll let you know!