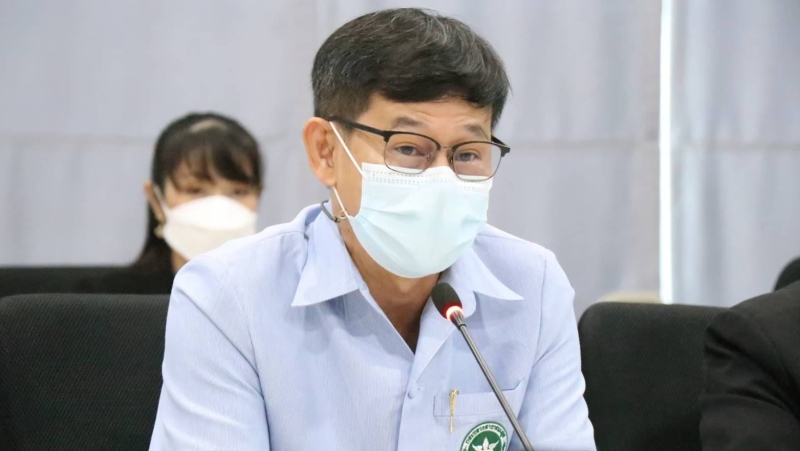 PPHO Chief Dr Kusak dismissed rumours that a woman had contracted monkeypox from Nigerian national Osmond Chihazirim Nzerem, and that the man brought to Vachira Phuket Hospital yesterday had no contact with Mr Nzerem too. Photo: PR Phuket / file

However, he also explained that health officials were waiting on blood test results to confirm the diagnosis.

“Phuket has no more monkeypox cases. The quarantine of a Thai male patient is in accordance with medical measures for intensive surveillance and prevention of chickenpox,” he said during a live broadcast on Radio Thailand Phuket this morning (July 27).

Dr Kusak said the man, who was transported from Thalang Hospital to Vachira Phuket Hospital yesterday afternoon, had been placed in quarantine as standard procedure.

“Phuket has not had any further reported cases of monkeypox after one person infected with monkeypox was found,” he said, referring to 27-year-old Nigerian national Osmond Chihazirim Nzerem.

“As for the first case of monkeypox, results from collecting samples of 19 high-low risk contacts for laboratory testing has seen all 19 of the test results negative and the symptoms [of the 19] are being monitored,” Dr Kusak continued.

“Medical staff are closely monitoring for symptoms, checking after seven days, 14 days and 21 days, and in high-risk exposed groups after 21 days of quarantine samples will be collected for laboratory testing one more time,” he added.

“As for the case on July 26, there have been rumours that a woman had contracted monkeypox after close relations with the first case involving the Nigerian [man]. I hereby confirm that such information is not true,” Dr Kusak said.

“The case of the Thai male patient also is not related to or have any connection to the first Nigerian patient. However, such action [quarantine and laboratory tests] is a precautionary measure for safety and is in accordance with the measures for disease detection according to the guidelines that the Ministry of Public Health and the disease control checkpoint operates,” Dr Kusak said.

“While waiting for confirmation from the laboratory tests, the patient has been isolated and quarantined to wait for the symptoms to subside, in accordance with medical surveillance measures. Therefore, the people are asked not to panic,” he added.

with those with monkeypox symptoms, which are clearly seen as blisters or pustules on the skin. It can be transmitted by skin-to-skin contact, including touching when having sex, but the patient will have a rash on the body that can be easily noticed,” Dr Kusak continued.

“This is different from those who are infected with COVID-19, who cannot be confirmed as being infected without being tested,” he said.