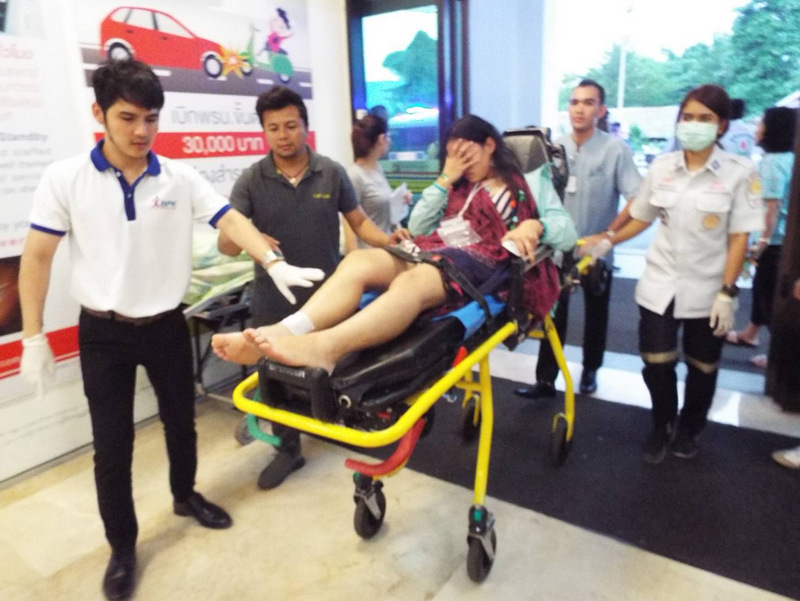 The tour speedboat King Poseidon 959 erupted into flames from a suspected leaky fuel line while hovering offshore from Viking Cave just after 11am, injuring dozens of the 31 people on board. (See story here.)

Of the 31 people that were on the boat there were 26 Chinese Tourists, one Chinese national tour leader, one Thai tour guide, the boat driver and two boat crewmen, Tourist Police reported.

Nineteen injured people were brought ashore yesterday at the Thai Morning Sun Port in Rassada at 5:40pm, where Phuket Vice Governor Prakob Wongmaneerung and Maj Eakkachai Siri of the Phuket Tourist Police were waiting for them along with medical teams ready to take them to hospital.

Tourist Police reported that one woman, Kwang Pei hong, 26, remains in the intensive care unit (ICU) at Vachira Phuket Hospital in Phuket Town with serious burns to her face, both legs and arms.

The extent of their injuries was not given.

Meanwhile, one of the boat crew, Prayat Sangwiman, 45, was taken to the Phuket Provincial Hospital in Rassada. The extent of his injuries has yet to be confirmed.

Phuket Tourist Police reported that the Chinese tourists were travelling in a tour group organised by “Apple Tour” company from Jiangsu. They arrived in Phuket on Friday (Jan 12) and were to return home this Wednesday (Jan 17).

“We have closely followed up on those injured,” Governor Norraphat said yesterday.

“We will have a meeting (today, Jan 15) to discuss about how to prevent marine accidents in order to make sure that tourist will be confident when visit Phuket,” he added.

That pledge from the Governor follows a slew of promises in March last year in response to a high-powered appeal by the Chinese government asking the Thai authorities to take more action to prevent deaths and injuries to Chinese tourists in Phuket and the surrounding region (See story here.)