PHUKET: The 60-year-old man who shot dead two colleagues at Phuket Bus Terminal 2 north of Phuket Town on Saturday night was known to be a “nice guy”, said witnesses working at the bus station today (Jan 25). 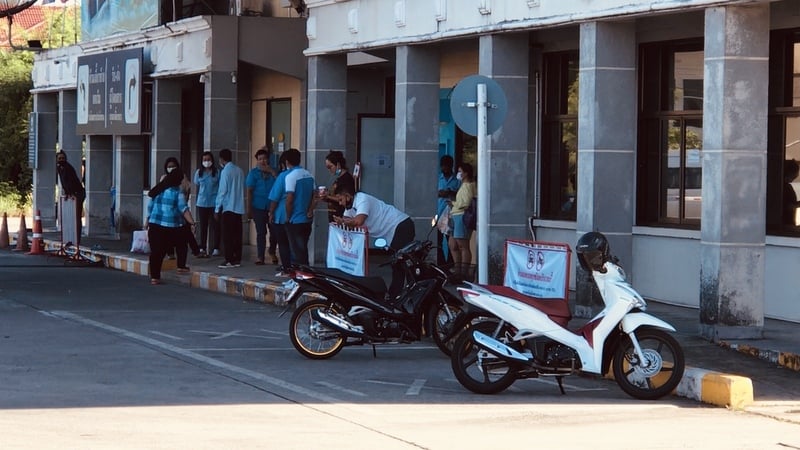 However, it also became clear today that the killer had also just formed a new motorbike taxi group at the bus terminal.

The news today came from witnesses at the bus terminal where Phuket City Police officers had the gunman, Wian Iadchuthong, 60, from Trang, re-enact his movements when slaying the two men: Prakob Chuthong, 54, a resident of Pa Khlok; and Yod Sae Lee, 50, also from Trang.

During the re-enactment, Jiraporn Longrak, who owns a small restaurant at the bus terminal, told the police that Mr Wian was a “nice man” and “he liked to help people around him”.

“Mr Wian has been here [at the bus terminal] for about seven years, since the bus terminal opened. He worked at the old bus terminal in Phuket Town before he moved to work here. He used to say that he liked this kind of job,” Ms Jiraporn said.

“Mr Prakob and Mr Yod were also colleagues of Mr Wian and they came to work here together,” she added.

Mr Wian used to be the president of the taxi cooperative at the bus terminal, but his term expired so he had his colleague, Mr Yod, to take over,” Ms Jiraporn explained.

Mr Prakob worked at the bus station, receiving motorcycles being parked in a long-stay garage at the bus terminal.

Ms Jiraporn said that she had no idea what had prompted Mr Wian to shoot dead Mr Prakob and Mr Yod. “He never told me about any problems with his colleagues,” she said.

“But there were times that Mr Wian complained that he was tired and that it was difficult to keep going,” Mrs Jiraporn told the police.

Ms Jiraporn also said that she never saw any fights or arguments between any of the three.

“Mr Wian would normally come to the restaurant every day and buy his colleagues some snacks as well,” she said.

But something had changed recently in Mr Wian’s life, Ms Jiraporn noted.

“Mr Wian lives in a house near the old bus terminal in Phuket Town, but for the last two days [before Saturday night], Mr Wian was sleeping here at the new bus station, and formed a new a taxi group of which he was the president,” Ms Jiraporn explained.

Ms Jiraporn told the police that before the crime, Mr Wian and his colleagues were sitting in the 24-hour taxi service office and drinking together.

She later heard two gunshots and she ran out to see what had happened, and saw Mr Wian, who she thought looked drunk, sitting in front of the office waiting to surrender to the police.

Mr Wian today was taken back to Phuket City Police Station, where officers said they were moving ahead with charging him for the double homicide.