PHUKET: National police chief Pol Gen Suwat Jangyodsuk has donated B100,000 to the wife of a noodle vendor shot by a drunken off-duty police officer on Bangla Rd and vowed to ensure justice in the case, Phuke police said yesterday. The donation of B100,000 was handed over yesterday (June 15). Photo: Eakkapop Thongtub 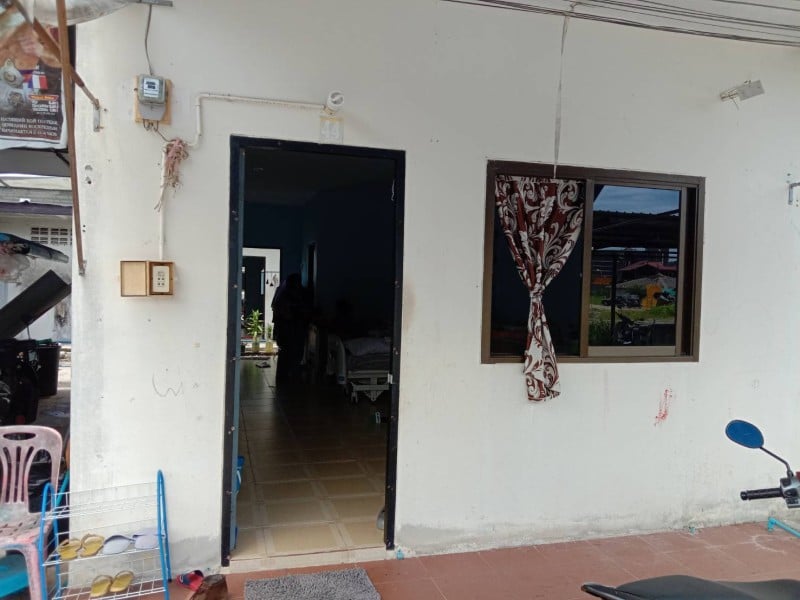 The noodle vendor, Aroon Thongplab, was shot in the stomach by Cpl Pornthep Channarong of the Phuket Provincial Police just before 6am on Feb 23 while he was walking along the Bangla Rd after collecting a noodle bowl from a customer.

Lt Gen Kitrat told Mr Aroon’s wife, Kulthida Chananan, that he had come to give B100,000 to her family on behalf of national police chief Pol Gen Suwat.

“Do not be worried about the case because the national police chief has ordered to work on this case decisively. Police will not help bad police,” Lt Gen Kitrat said.

“Which finger is bad, we are ready to cut,” he said.

Before yesterday, the only support Mr Aroon and his stricken family had received from the Royal Thai Police were flowers and B20,000 cash handed over by Region 8 Police the day after the shooting and B10,000 from the Phuket Provincial Police.

A campaign launched last month founded by a Phuket expat to help Mr Aroon raised almost B400,000 in just one week.

Mr Aroon was left paralysed by the bullet, which entered through the stomach and became lodged in his spine. After Mr Aroon woke from a coma, doctors at Vachira Phuket Hospital managed to safely remove the bullet, but were unable to help Mr Aroon recover the use of his legs.

After months in recovery, Mr Aroon was only recently discharged from Vachira Hospital to return to stay with his family at their rented house in Patong.

Ms Kulthida explained that she needs to replan everything for her family’s future because her husband has been left unable to make any income to the family. The young couple, Mr Aroon is 25 years old and his wife is 26, have two children: a 4-year-old daughter and a 6-month-old son.

“Aroon still suffers pain in his lungs from surgery and is unable to move or feel the lower part of his body, from his waist to his toes,” Ms Kulthida said.

“Luckily, the upper part of his body can move and feel. He can use his hands to hold a spoon and fork to eat normally,” Ms Kulthida said.

“I have to thank every person for helping me in this hard time. My husband is likely to be disabled for his whole life, but I still have a good hope. If he is healthy, in the future he may go through physical therapy, enabling him to walk again,” she said.

“Aroon can hear everything I say and reply to me by gestures. He can speak, but it tires him. Nodding is yes and shaking his hand is no,” she said.

“He needed to use an aspirator for three months in the hospital, but now he can breathe by himself,” she added.

“As for progress in the court case, the court has appointed to have a questioning on June 28. Pornthep’s family has never talked with me or offered any help. His mother knows what she should do,” she said.