PHUKET: A total of 29 baby leatherback turtles broke through the sand and made their way into the sea at Kata Beach last night (Feb 26), as a large gathering of well-wishers stood back to watch.

marineanimalsenvironmentnatural-resourcestourism
By The Phuket News 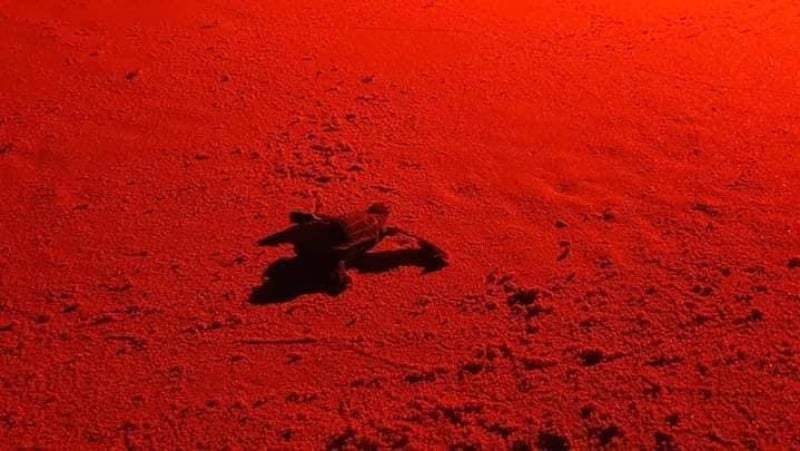 The crowd was kept back from the nest site and a path that had been cleared to the sea. Photo: DMCR

Local residents massed at Kata Beach in high hopes of watching the turtles hatch last night after the sand above the nest started to collapse yesterday morning.

Marine life experts from the Department of Marine and Coastal Resources (DMCR) this morning (Feb 27) reported that the first turtles surfaced at about 10pm last night and began making their way to the water’s edge.

There were 80 eggs in total in the nest, the marine life officers reported.

In addition to the 29 that made it into the sea last night, five were taken into care as they were too weak to make the life-starting journey across the sand.

Three of the five baby turtles taken into care were released this morning. The other two will remain in care until they are strong enough to be released, the DMCR officers noted.

Of the 80 eggs, 32 baby turtles did not survive, and a further 14 eggs were not fertilised, the officers confirmed after inspecting the nest.

The laying – and now hatching – of leatherback turtle eggs on Kata Beach is seen as a very positive sign of the return of nature to the island’s beaches after years of occupation by visiting tourists.

The nest that hatched last night is the first to be recorded at Kata Beach in more than 20 years.

The eggs are believed to have been laid by a ‘supermum’ turtle, weighting an estimated 300kg, which marine wildlife experts believe has laid at least five nests in the region, including at Mai Khao Beach at the northern end of the island and at Thai Muang Beach in Phang Nga, just north of Phuket.

The marine officers have named the ‘supermum’ turtle ‘New Year’, as she laid the nest on Kata Beach in the first hour of Jan 1.