PHUKET: Hopes are high that the leatherback turtle nest laid on Kata Beach just after midnight on New Year’s Day will hatch tonight after hundreds of people gathered at the beach last night in the hope of witnessing the spectacle. 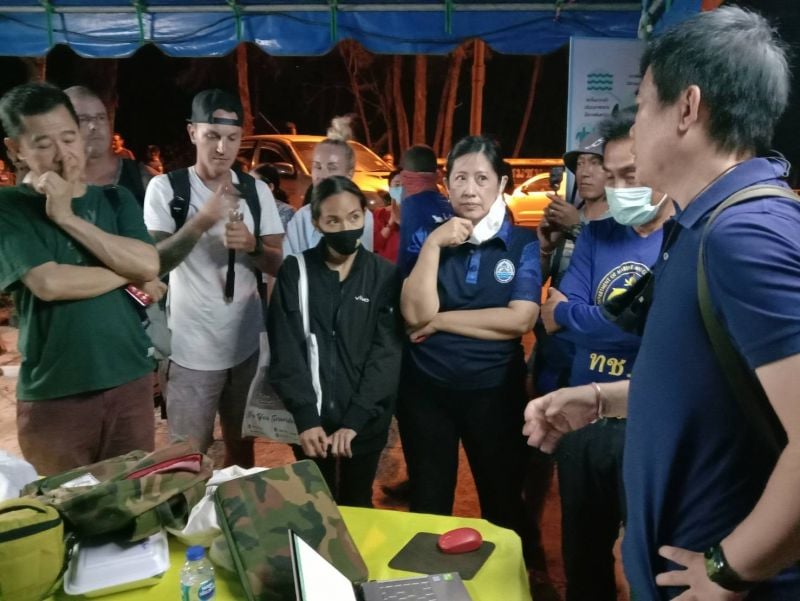 It was explained last night that the turtle nest had not yet reached a temperature for the turtles to start breaking through the sand to reach the sea. Photo: Eakkapop Thongtub A festive atmosphere is being enjoyed to mark the occasion. Photo: Eakkapop Thongtub

Marine life experts from the Department of Marine and Coastal Resources (DMCR) have had the nest under watch and protection since the large leatherback, estimated to weigh about 300kg, laid the nest at about 00:50am on Jan 1.

While the site of the nest remains sealed off, further back near the beach road a large sign, decorations of turtles and educational displays have been set up to mark the occasion. Food vendors are on site to cater to those hoping to see the hatching.

The officers believe that from studying the nest, and its temperature, the eggs are likely to hatch tonight (Feb 26).

The nest is the first to be seen laid at Kata Beach for 20 years, noted Dr Pornsri Suthanaruk, Deputy Director-General of the Department of Marine Natural Resources throughout the country.

Of note, Dr Pornsri for years served as the Director of Environmental Office Region 15, based in Phuket, respodning to issues such as dirty beach water and haze over Phuket.

“We have not seen any turtle nests laid here for a long time because the area is usually full of tourists. Now people are waiting for this nest, laid on New Year’s Day, to hatch, which should be tomorrow [Feb 26],” Dr Pornsri said last night.

“It is a good sign indicating the return of Phuket’s marine life,” she added.