PHUKET: The Phuket Governor yesterday gave the order for the COVID-19 ‘Field Hospital’ set up at the site of still-unfinished new Provincial Hall to ‘suspend all activities’ from tomorrow (May 31), confirming his announcement made earlier this week. 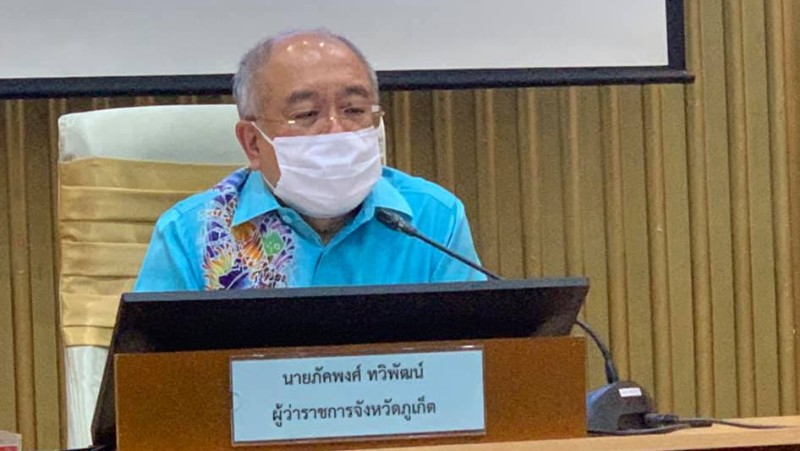 Phuket Governor Phakaphong Tavipatana at the meeting of the Phuket Communicable Disease Committee, which he chairs, yesterday (May 29). Photo: PR Phuket

The facility, initially set up in readiness for a huge influx of COVID-19 patients, currently has only two people in care.

Governor Phakaphong Tavipatana at the meeting of the Phuket Communicable Disease Committee, which he chairs, yesterday (May 29) said that Phuket had passed one month without a confirmed infection, claimed a report by the Phuket office of the Public Relations Department (PR Phuket).

The Governor’s sweeping announcement that Phuket has not had a confirmed case of a person infected with COVID-19 for the past month brushed aside at least seven cases of people being reported by Phuket officials themselves as “confirmed” infected with the virus.

All seven cases are still counted as confirmed as positive in the total number of confirmed cases for Phuket, and in the national tally.

Governor Phakaphong on Wednesday announced that the Italian engineer and his Chinese wife reported as confirmed infected on Sunday and Monday earlier this week were being treated  until test results are returned from Bangkok.

However, Phuket Public Health Office (PPHO) Chief Dr Thanit Sermkaew on May 19 confirmed that a Patong shopping centre staffer who had returned from Prachinburi tested positive for the virus on May 15. Samples were sent to Bangkok to be tested for the virus. The results of those tests have not be publicly revealed.

As for the four reported as confirmed infected on May 10, Deputy Public Health Minister Sathit Pitutecha traveled to Phuket on May 14 to announce that those four had been confirmed by tests in Bangkok as not infected with the virus.

Oddly, five days later, Phuket health chief Dr Thanit on May 19 reported that Phuket health officials had yet to be informed of those test results.

Regardless, all seven cases reported by Phuket officials as confirmed in May still remain counted as confirmed positive in the Phuket tally and the national tally for the total number of people infected with the virus since the outbreak began.

According to the PR Phuket report, Governor Phakaphong himself again pointed out that Phuket had recorded 227 confirmed cases since the outbreak began – the same total uncorrected to account for the cases now being presumed as not infected.

“There are only three infected patients [remaining at the field hospital]. Of the total 227 patients who have received medical care, 221 have recovered [sic] and gone home,” he said, not accounting for the three people in Phuket who have died from the virus.

“We can see that the situation in Phuket has improved gradually and returned to normal conditions,” the Governor said.

However, the “closure” is to be treated as a “suspension of activities” at the facility as a precaution, in case field hospital is needed again soon, he added.

Of note, the second ‘field hospital’, set up at the Prince of Songkla University Phuket campus, was closed on May 15 after the number of patients there also dwindled.

“Measures [to counter the spread of the virus] have been implemented in Phuket since the outbreak began, and all people in Phuket have cooperated well until the situation gradually improved,” Governor Phakaphong said.

“However, must comply with the government’s regulations, such as wearing a mask. washing hands with sterilizing gel and social distancing,” he added.

“Although the government is relaxing some of the measures so that people can live normal lives, everyone must still act strictly in accordance with the government guidelines to prevent the spread of the disease again,” Governor Phakaphong said.