PHUKET: The Governor of Phuket, Narong Woonciew, clarified this morning (Aug 31) that two patients infected with COVID-19 had in fact fled from a quarantine centre situated in Karon, which conflicted with a statement he gave yesterday claiming there had been no escapees. 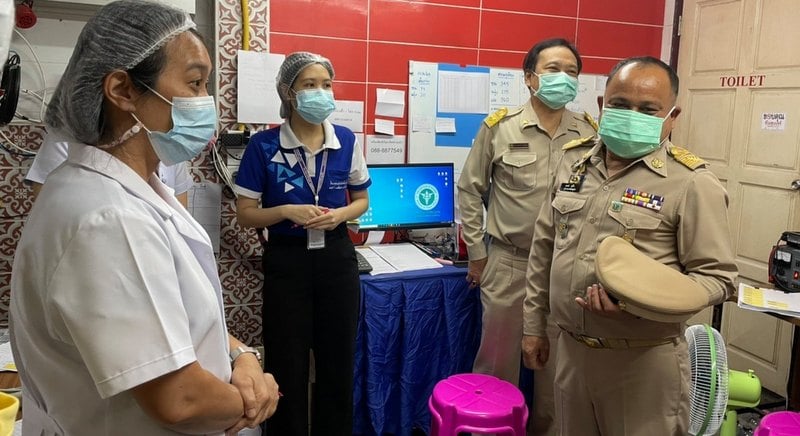 Governor Narong said at a mass assembly of Phuket police gathered at the Phuket Emergency Operation Center at the Phuket Provincial Police headquarters in Phuket Town yesterday that reports of patients escaping from any quarantine venue were false; “our police, military officers and relevant officials have checked and found that no patients have fled from any field hospital,” he said.

However, today he released a statement that two patients had escaped a facility based in Karon that has been designated as a quarantine centre but that they have since returned to the venue.

No official explanation was given as to why the Governor was not informed accurately of the situation yesterday which led to the contrasting statements.

“I was informed that some people really had climbed the fence and fled the quarantine centre in question,” Governor Narong told the press around 9am this morning in response to photos of two men fleeing the quarantine venue that emerged on social media.

“They did flee but later returned to the quarantine venue and have remained there since,” he added.

“It was explained to me that the two men in question had wanted to go out and buy something but officers had denied them which is why they opted to climb the fence and leave.

“Usually, there are military officers on standby who patrol the venues, although this incident highlights that measures need to be intensified as there are many people staying at the venue and therefore extra help is required,” Governor Narong said.

“From now on we will ensure the hotel staff are present to assist the officers on standby at the venue. We have discussed this with all parties and they are in agreement.

Governor Narong added that last night he, the Vice Governor, the Vachira Phuket Hospital Director, and colleagues went to “examine the quarantine venues and cheer up officers working there”.

“We try not to limit the rights of patients at the quarantine centres by allowing them to interact to an extent but it is extremely important that they respect the necessary health and safety conditions.

“I want to inform people staying in the quarantine venues to please respect and follow the disease control measures strictly,” he concluded.