PHUKET: Police have arrested the man wanted for the vicious beating of a 71-year-old gold shop owner in Phuket Town last Saturday night (Oct 23), which saw the robber make off with  gold items worth a reported B8 million. 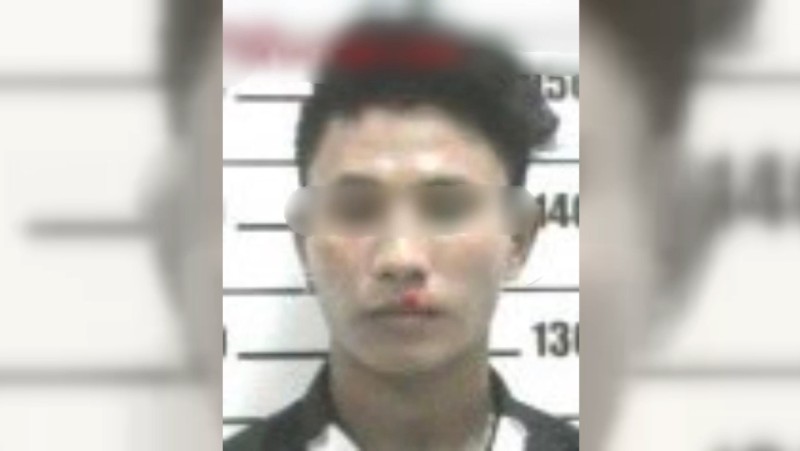 Police have confirmed that the suspect was arrested at a care care centre on Wichit Songkram Rd in Phuket Town at 7:30am yesterday (Oct 26), but are still waiting for a top-ranking police officer to announce the man’s identity at a press conference.

A photo of the suspect, with his face blurred, has been provided to The Phuket News, but no other details of his identity

At last report, the robber was believed to be a Myanmar man from his accent while speaking Thai during the robbery of the Thong Thaweechai gold shop on Ranong Rd in the heart of Phuket Town, where owners Wangdee Inthawong, 71, and Puangpen Sakkasemkrit, 65, lived upstairs.

Police have since revealed that the robber is be 25-20 years old.

They have now also revealed that in addition to the gold stolen, the robber made off with B100,000 in cash

The robber was tracked down via CCTV footage of him making his escape from the scene, where he had repeatedly beaten Mr Wangdee on the head with the piece of wood.

CCTV footage from inside the gold shop showed that the robber had entered the home above the shop with a large knife. So far no reports have confirmed that the knife was used in the attack on Mr Wangdee.

Police have reported that an arrest warrant was presented in placing the suspect uder arrest. They have yet to confirm exactly which charges he will face.

The man was taken to the Region 8 Police headquarters at the northern end of the island for questioning, police confirmed.

At the Thong Thaweechai gold shop, Benjaporn Watcharatsiriyuth, 61, said that they will now add more CCTV cameras throughout the building to increase security.

She also claimed that the gold stolen was valued at B10 million.

Ms Benjaporn praised the police for catching the robber after just three days of searching for him.

Police have reported that the man has confessed to the robbery.

The man reportedly told police that he spent B70,000 of the cash stolen on online gambling. He had only B30,000 cash left from the robbery.

Police have yet to report what, if any, of the gold items had been recovered.