PHUKET: Police have confirmed that the driver of a pickup truck who rammed into five vehicles killing one person and seriously injuring two others in Chalong on Friday (Mar 1) tested positive for alcohol and has been charged.

accidentsalcoholdeathpolicetransport
By The Phuket News 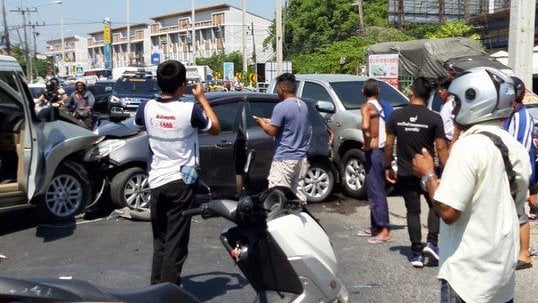 A man and a woman are recovering in Phuket Vachira Hospital after suffering serious injuries. Photo: Chalong Municipality

Capt Somkiet Sarasin of Chalong Police confirmed that the pickup driver who was previously reported as Mukpol Artichol, was, in fact, Narong Songchu.

“The 44-year-old has been charged with reckless driving under the influence of alcohol, causing death, serious injury and damage to property,” Capt Somkiet confirmed.

“He is currently being held in a cell in Phuket Provincial Court.”

Narong was driving a bronze Toyota Hilux pickup truck northbound on Chao Fa East Rd when he struck a motorbike that was waiting to turn right at a red light at the ‘Koktanode Intersection’ just south of Wat Tai.

His pickup then rammed into a grey Toyota Yaris and another motorbike in the opposite lane waiting to head south, which resulted in two more cars becoming involved in the accident. (See story here.)

“The motorbike driver who was killed, Mr Chaiyan Daungkiet, was driving alone. He was wearing a helmet but died from his injuries,” Capt Somkiet clarified.

“Another man and woman were seriously injured when their motorbike was hit in the collision. Both are recovering at Phuket Vachira Hospital,” he confirmed.