PHUKET: The search for 18-year-old Kittipong “Boy” Samanbut, who fell overboard in the tour boat collision off Phuket’s east coast on Wednesday, has so far failed to find the missing crewman, search teams led by the Royal Thai Navy reported this morning (Dec 20).

tourismmarineSafetyaccidentsdeathpolice
By The Phuket News 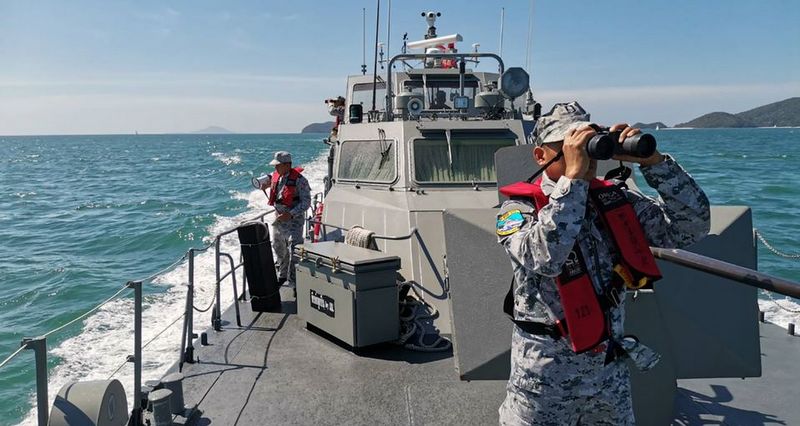 Navy patrol boat Tor 229 has also been dispatched to search the area, and local fishing boats have also joined the search, a Navy report confirmed this morning.

The search area is currently set at one square nautical mile off Koh Khai Nok, the Navy report said.

A total of 24 divers, from the Royal Thai Navy Third Area Command, based at Cape Panwa, as well as from the Marine Police and local rescue teams, have been allocated to the search.

However, Lt Col Nattaphong Pleugtaratigul of the Phuket Marine Police explained to The Phuket News that the divers were experiencing low visibility underwater of about two metres only.

Asked what caused the collision, Lt Col Nattaphong said, “I still don’t know how the accident happened. The tour boat captain is dead, and Khao Yao Police are the ones responsible for investigating this case.

“Accidents happen in this area a lot. There are a lot of speedboats here, and the boat drivers are not careful enough,” Lt Col Nattaphong said.

No officers at Khao Yao Police Station were available to comment on the investigation when The Phuket News called this morning.

While the Koh Khai islands are located only some 7.6km direct east of Koh Siray, on the east side of Phuket Town, the islands in terms of administration are technically in Phang Nga.

Surat Mat-O-Sot, the 49-year-old captain of the tour boat Choksuphasan 35, died from injuries sustained in the collision with the luxury motoryacht Stallion on Wednesday.

The collision left six tourists admitted to hospital for broken bones and other serious injuries, and at least 11 more treated for minor injuries from the impact. (See story here.)

Capt Surat was involved in another sea collision in 2014 that killed two Korean tourists and injured 26 others. In that incident, Surat was the helmsman of the Seastar 29, which had more than 40 tourists on board returning from a day-trip to the Phi Phi Islands, when it collided with the fishing vessel Sinpichai 11.

Surat said he had bent down to pick up a black plastic bag that had blown into the boat, and that he only noticed the trawler when he looked up. He turned sharply to try to avoid a collision but the speedboat became caught up in the trawler's fishing equipment and tipped over. (See story here.)

The Bangkok Post reported that Surat was charged with recklessness causing death over the collision. After serving time in prison, Surat returned to work as a speedboat driver, until his death in the collision on Wednesday. (See story here.)