PHUKET: Korn Chatikavanij, a former Democrat finance minister and now leader of the Chart Pattana Kla Party, has affirmed the party’s stance to allow Phuket people to elect their own governor.

politicseconomics
By The Phuket News 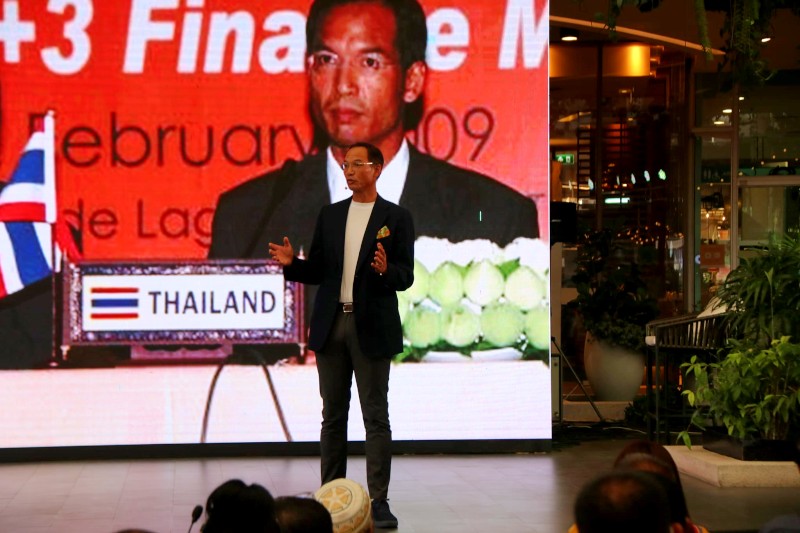 Mr Korn’s confirmation came at an event at Central Festival Phuket shopping mall on Saturday (Nov 12) held to announce the party’s two candidates for Phuket in the upcoming national election, currently scheduled to be held May 7 next year.

The event on Saturday was held under the banner “D.I.Y. Phuket” ‒ advocating “Phuket Province manage itself”.

“We planted flags in Phuket because we have two candidates in two districts who are new generation, capable and fully committed to serve the people of Phuket,” Mr Korn said.

“The DNA of the party is to solve the problems of the people’s brothers and sisters in Phuket. The national parties have been quarreling with each other a lot. Chart Pattana Kla Party therefore sees the new generation, born here and raised here, but has gone out to experience the outside world, to become a success,” he added.

“I have experience with the two candidates and we see the need to develop Phuket first, namely, Phuket has to manage itself ‒ choose your own governor, make your own decisions and allocate your own budget in order to accommodate tourists who will travel here, which will be tens of millions of people in the next few years. And we believe that we can work well together with the people of Phuket,” Mr Korn said.

Joining Mr Korn for the event was Suwat Liptapanlop, a former deputy prime minister and now Chairman of the Chart Pattana Kla Party.

“The COVID-19 pandemic brought all the economy to a halt, resulting in a bad economic situation. We have to borrow and go into debt to solve the problem; this goes for both the government and [for members of] the public,” Mr Suwat said.

“As a result, the country’s GDP has decreased accordingly, but the most important thing is the debt of the private sector and unemployment among the people,” he added.

“The problem is not only from COVID-19 pandemic, but also from problems of war causing the price of oil to rise again, causing inflation,” he said.

“In this, it is the SME entrepreneur who will suffer the most,” Mr Suwat noted.

“We came to Phuket because Phuket people have suffered the most, because the tourists have disappeared and Phuket is a city based on a tourism economy,” Mr Suwat said.

“With 40 million tourists missing [nationally], Phuket’s main tourism economy has been heavily impacted. More than 400,000 people have been seriously affected. The main point is that Phuket must be restored. The economy must be managed first, which is the specialty of the Chart Phatthana Kla Party,” Mr Suwat concluded.

Mr Korn also attested to seeing firsthand the impact of the pandemic on Phuket’s economy, and people, during his visit to the island last year.

“I think we have to face the fact that the infrastructure broadly speaking is still substandard, care for the environment is still probably not as good as we would like to see to preserve what we have for future generations,” Mr Korn explained in an exclusive interview with The Phuket News.

“I think there’s a lot of work to do still to uplevel Phuket into a truly premium destination. There are also in my opinion other potential for Phuket especially for the young generation,” he said.

It was during that visit that Mr Korn first confirmed his stance on Phuket having an elected governor. (See here.)

Mr Suwat is also very familiar with Phuket’s economic situation. He was last on the island in May for the opening of the B4.5 billion Andamanda Phuket water fun park in Kathu.

The park was developed and is operated under the Proud Group, of which Mr Suwat’s daughter, Proudputh Liptapanlop is Executive Director.