PHUKET: Medical staff at Vachira Phuket Hospital are investigating whether COVID-19 was a contributing factor in the death of a 91-year-old woman whose body was found at her home in Karon last night (May 4) after she became a ‘high risk contact’ following the COVID exposure incident at Chalong Hospital. 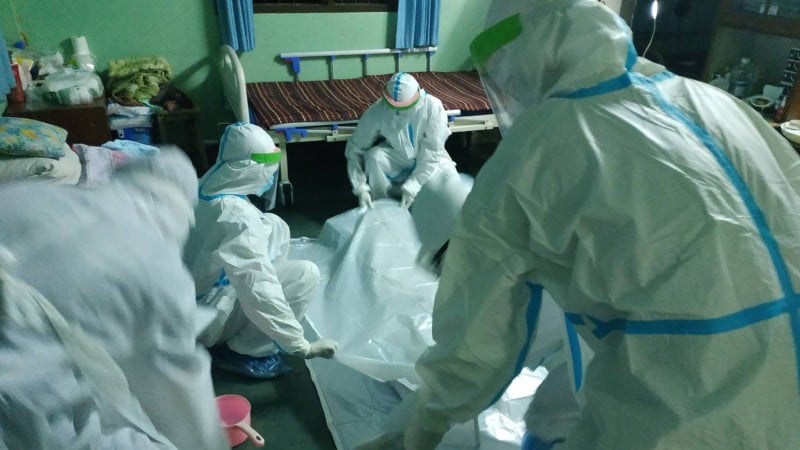 The medical team recovers the body of 91-year-old Puan Kingkaew at her home in Karon last night (May 4). Photo: Eakkapop Thongtub

Rescue workers, police and a medical team from the Phuket Provincial Hospital arrived at the woman’s home, in Moo 2 Karon, at 6:30pm last night.

On the floor near the bed was the body of 91-year-old Puan Kingkaew.

The medical team recovered her body following COVID protection procedures and the home was sanitised with a disinfectant spray.

Ms Puan was designated a ‘high risk contact’ for COVID-19 after it was confirmed that she was treated in a bed at Chalong Hospital on April 30 next to a 74-year-old woman who was later confirmed to have been infected with the virus.

The 74-year-old woman, who has not been named, was admitted to the Emergency Accident Department at Chalong Hospital for dizziness on Apr 28. Doctors treated her symptoms, prescribed medication and she was sent home.

Two days later, last Friday (Apr 30), the woman returned to the outpatient department with complaints of dizziness and diarrhea.

The woman was admitted and assigned a hospital bed, but by the next day (last Saturday, May 1) she had developed a fever, shortness of breath and difficulty breathing, so doctors ordered a lung X-ray, examined her for COVID-19 and moved the woman to an isolated room.

Doctors were informed late Sunday night that test results had confirmed the woman was infected with COVID-19.

As a precaution, Chalong Hospital has been closed until next Monday (May 10).

Chalong Hospital Director Suchart Nichawanna has confirmed that 45 staff and medical personnel deemed to have had high risk exposure to the 74-year-old woman are to be admitted to stay at The Royal Paradise and Spa Hospital in Patong, which is currently serving as a ‘Local Quarantine’ facility, today (May 5).

Meanwhile, 14 personnel deemed to have had ‘low-risk exposure’ exposure to woman are allowed to self-quarantine and monitor themselves for signs of infection at home.

Four patients who were receiving treatment at Chalong Hosptial during the 74-year-old woman’s visit were transferred to Dibuk Hospital, along with their relatives, who were in close contact with the patients.