PHUKET: Royal Thai Army soldiers based in Phuket will call in tuk-tuk and taxi drivers in Patong for an “attitude adjustment” briefing after two tourists were viciously beaten in the tourism town last week. 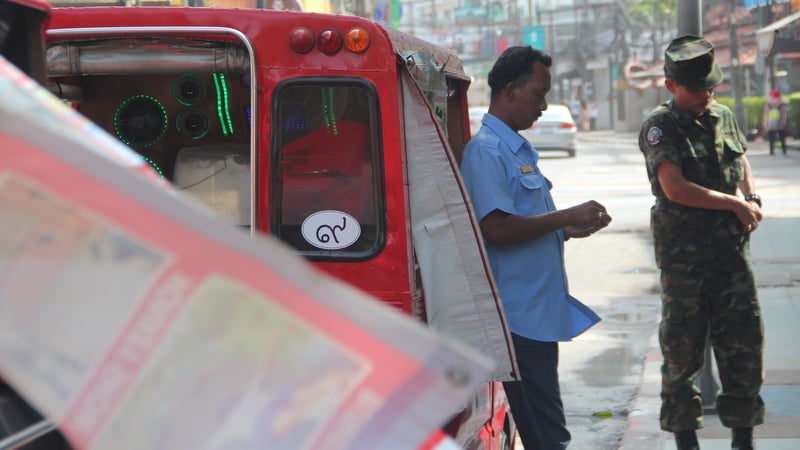 The training session, politely called “public transport training for drivers – tut-tuk, taxi and motorbike taxi as the better service”, is being orchestrated by the Phuket Land Transport Office (PLTO).

In the attack at about 11pm last Thursday (Mar 28), six public transport drivers – comprising taxi drivers, tuk-tuk drivers and at least one motorcycle taxi driver – beat two male tourists from the UAE to the ground in the middle of Pracha Nukroh Rd in front of Malin Plaza in Patong.

The drivers proceeded to kick the tourists – including repeated kicks to the head – while they were on the ground, in full view of any other tourists shopping and dining at the popular market.

Parts of the vicious beating were recorded by a bystander. In the video recording, a woman’s voice can be heard screaming for the attackers to stop. Her pleas were ignored.

However, PLTO Chief Banyat Kantha told The Phuket News this week that the “attitude training” was already planned before the violent attack.

Mr Banyat, who as PLTO Chief is responsible for issuing licences to all public transport drivers on the island, refused to confirm or deny whether any action by his office was being taken to prevent another vicious attack on tourists again, despite the six suspects already being arrested and charged – and currently being held behind bars on remand pending trial for affray causing bodily harm.

“Their behaviour needed to be improved anyway,” he added.

Yet, exactly what will be taught at the “training” and how, will be left up to the military, Mr Banyat confirmed.

“I don’t have the details of this training for now. I have to talk with military officials about it,” he said on Tuesday (Apr 2).

Lt Col Santi Sakuntanark, Commander of the Royal Thai Army’s 25th Military Circle, which is based in Phuket, was polite in explaining his role.

“This training is the PLTO’s job to do, but they don’t have many officers so we are happy to support them in doing their job,” he said.

“The behaviour needs to be improved for better service,” he said.

“Our main purpose is to protect our tourism. We will cover the issues of law enforcement, public transport driver’s licenses, parking spaces, being service-oriented when serving tourists and not extorting them, and so on,” Col Santi explained.

“I expect about 100 drivers to take part in the training, which will be held before the Songkran holidays,” he added.

“The training might take two or three days, but that is up to the PLTO,” he said.

All six suspects arrested for the attack have been refused bail and are being held in remand, Patong Police Chief Col Anotai Jindamanee confirmed.

“Five suspects are being held at Phuket Provincial Prison right now. The other one suspect is not over 20 years old. He will be handed over to the Phuket Juvenile and Family Court today,” Col Anotai said on Tuesday (Apr 2).

“They all have already been charged with affray causing bodily harm by attacking two tourists,” Col Anotai confirmed.

However, police have yet to conclude their investigation, he added.

“We have yet to complete our questioning of six other witnesses, so we requested that the suspects be held at Phuket Provincial Prison for 12 days, from March 30 to April 10.

“They have been refused bail while the investigation is in process. If police granted them bail, then the suspects might flee the charges,” he said.

“And Phuket Immigration led the tourists in identifying the suspects,” he added.

The tourists departed Phuket last Friday (Mar 29), the day after the attack.

“They returned home on a flight back to Dubai on Emirates Airline Flight EK 2593 on March 29. They thanked everyone involved in arresting all the suspects,” Col Anotai said.

“I don’t know who started the fight first. We are still questioning the people involved now, but the tourists also fought back,” Col Anotai explained. (See story here.)