PHUKET: The Phuket branch of the Agricultural Land Reform Office (Alro) has confirmed that more than 13,000 rai of state land dedicated to helping poor farmers is now open for limited development, including huge tracts of land to the north and south of Patong, and along the hills the line the back of the resort town. 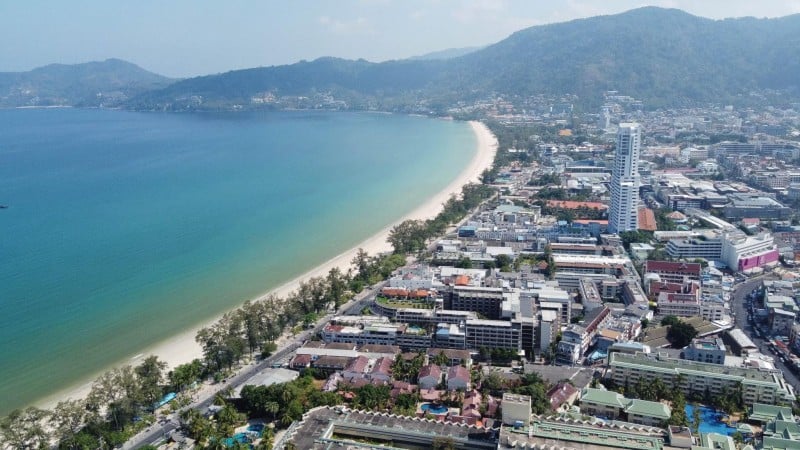 The SorPorKor land use changes open have opened the door to widespread development around Patong. Photo: Worapong Yuramhan

So-called “SorPorKor land” became available through Alro after the agency was formed under the Land Reform Act of 1975. The land-reform project intended to provide poor farmers with what was deemed to be degraded forest areas so that they could eke out a living growing crops on state land.

Under the “nine rights” laid out in the act, farmers allocated SorPorKor land were issued a SorPorKor land-use document and were allowed to use the land for agricultural purposes only. The land-use rights were allowed to be passed on to family members, but the land could never be sold legally as it was to forever remain owned by the government.

The new uses are allowed now, Phuket Alro Office Chief Ammarit Kongkeaw confirmed to The Phuket News this week. However, people already allocated SorPorKor land must register their intent to use the land under the new uses, Mr Ammarit explained.

“The new uses are in effect already. People can come to the Phuket Alro office to register [their intended new use of the land],” he said.

Mr Ammarit told The Phuket News that 8,206 rai of SorPorKor land in Phuket was already occupied by legally entitled holders. The remaining 4,864 not is occupied, but still held vacant by the Land Reform office.

Asked to confirm how the volume of land administered by the Phuket Alro office had fallen from more than 32,000 rai in 2014 to just over 13,000 rai today, Mr Ammarit said that a lot of SorPorKor land had been handed back to the Royal Forestry Department under an agreement brokered in 1994, with the land handed back much later.

The move to expand SorPorKor land use followed Deputy Agriculture Minister Thammanat Prompao announcing last year that he wanted to improve how government land was being used, and how SorPorKor land could be used to support the tourism industry, Mr Ammarit explained.

All Alro offices submitted their suggestions, with the Phuket Alro office submitting theirs in August last year, Mr Ammarit said.

Mr Thammanat was specifically interested in the SorPorKor land in Phuket, he added.

Mr Ammarit explained in his report that most of the land in Phuket is not suited for growing crops, and much of the undeveloped land in Phuket had little access to the large volume of water supply needed to grow crops.

“Phuket is so different from other provinces. Phuket needs to have flexible rules for tourism,” Mr Ammarit told The Phuket News.

“Phuket province relies on the tourism industry, not farming, but most of this land has mountain and sea views, which would be much better used in other ways,” he said.

“I also explained [in the report submitted in August] that some people had asked whether they could build a hotel on their [SorPorKor] land so they could make an income, and employ people,” he said.

Mr Ammarit admitted that enforcing the restrictions on SorPorKor land in Phuket had been difficult.

There are currently some 90 prosecutions being heard in court for illegal construction on SorPorKor land in Phuket.

“I have suggested that instead of asking the court to order these hotels demolished, that Alro allow these hotels to remain but charge rent for using the land,” Mr Ammarit said.

“This would show people that we can be flexible in allowing the use of the land for tourism, while helping people make an income, increasing employment and help make a better economy for Phuket,” he said.

Mr Ammarit conceded that the move to open SorPorKor land to tourism development had received some heavy criticism online since the announcement last week.

In reply, he noted, “I want people to see the way of improving the use of the land, not changing its ownership."

Phattanan Pisutwimol, President of the Phuket Real Estate Association (P-REA), shared his concerns about how the new rules will be rolled out, and how specifically unbridled development could easily spoil the natural beauty surrounding Patong, which he rates as the most important factor for attracting tourists and investors.

“I agree with the idea of allowing buildings that are already on SorPoKor land to stay instead of demolishing them. They represent large investments already, and by charging them [the owners] rent, the money could be spent on developing the local community. That would be a much better choice,” he said.

However, Mr Phattanan explained his concerns were focused on the new buildings that will rise amid the green forest areas.

“Most of the SorPoKor land is in forest areas on the mountains. They have sea views and need roads to access them, but it is expensive land, especially in the Patong and Karon areas, where this land would cost about B5-6 million per rai. That will open the door to development and attract many foreigners to invest in Phuket a lot.

“So while I agree with the new SorPoKor land idea, I want officials to be careful in considering what is best to support the tourism industry. It would be better to use Public Works & Town and Country Planning regulations in the different areas to control development,” he said.

“For example, the [B1.5 billion] cable car project in Phuket is a good tourist attraction, but it is planned to be built in some forest area. If this land is to be re-registered for development, it would be good for the tourism industry.

“But if we’re not careful other buildings such as shopping malls or other types of buildings might be allowed, and this new construction, if it is not considered well, will affect the environment and forest areas in Phuket.

“These new rules are supposed to protect Phuket’s main source of income, but instead they may jeopardise it,” he added.

@DavidUSA YOU get awareded with a trophy ! For the most silly comment here. An American at his best ...(Read More)

Quite a number of on Phuket living foreigners who usually welcome family/friends to stay here a holi...(Read More)

As usual DeKaaskopp is derailing, insinuating and trying to create a kind of hateful 'atmosph...(Read More)

It's not that an elderly woman died of SARS CoV-2, it's that she contaminated an entire hosp...(Read More)

Sinovac? No thanks with its 52% chance of immunity and infamous disregard for safety by its manufact...(Read More)

People are getting shots and thinking immunity is instantaneous. It takes a month AFTER the second s...(Read More)

That prior measures worked well to keep numbers low is hardly a convincing argument against more me...(Read More)