PHUKET: Law enforcement by personnel in combat fatigues is becoming a normal scene for tourists on Bangla Rd as patrols for weapons and drugs continued on the popular nightlife street last night (Nov 16). 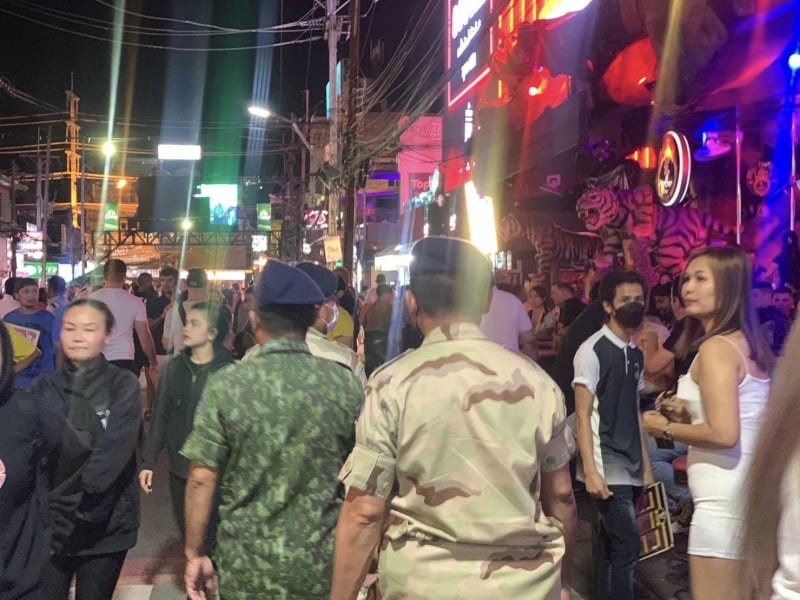 According to a report by the Phuket office of the Public Relations Department (PR Phuket), the patrols came after Kathu District Chief Siwat Rawarangkul ordered Piphob Sudkhao, Chief of the Kathu detachment of the Volunteer Defense Corps (OrSor), to patrol the street “to “maintain order and monitor the situation in the area”.

The patrols followed “news of unrest and movements of individuals prone to violence or groups of people to symbolically express themselves, which may affect the credibility and tourism of Phuket,” said the report.

Personnel were deployed “to provide security in the area of ​​Kathu District and watch out for incidents involving groups of people or tourists where a large number of foreigners come to travel”, the report added.

Personnel are to meet with business operators and advise them to help keep an eye out for “them”, the government report noted.

“If you find foreign or suspicious objects, inform police officers or related agencies to prevent incidents involving life and property [in order] to build confidence for tourists and take action while solving drug problems in the area of ​​Kathu District,” the report continued.

The goal of the campaign was “to prevent and suppress ‘x-rays’ [sic, invisible actions] in risk areas that may involve drugs, both drug users and traffickers, in accordance with government policies”, the report concluded.

The post by PR Phuket was marked with “performance results, normal events”.

The report made no mention of officials wanting to showcase security while the APEC meetings are being held in Bangkok, despite the Bangla Rd security clampdown ramping up only on Monday, as APEC dignitaries started arriving in the capital.

Of note, OrSor are not military, or police. They are a militia of “volunteers”, meaning only they were not conscripted (see here).