As Phuket reopens, officials on alert for illegal migrant workers

As Phuket reopens, officials on alert for illegal migrant workers

PHUKET: Phuket officials are asking employers with any migrant workers not vaccinated to bring them to any of the five government hospitals on the island to receive vaccination injections.

COVID-19Myanmarhealtheconomicstourismimmigration
By The Phuket News Officials are on alert for illegal migrant workers arriving in Phuket. Photo: The Phuket News / file The PPHO has called for employers to present their migrant workers for vaccination at any government hospital. Image: PPHO 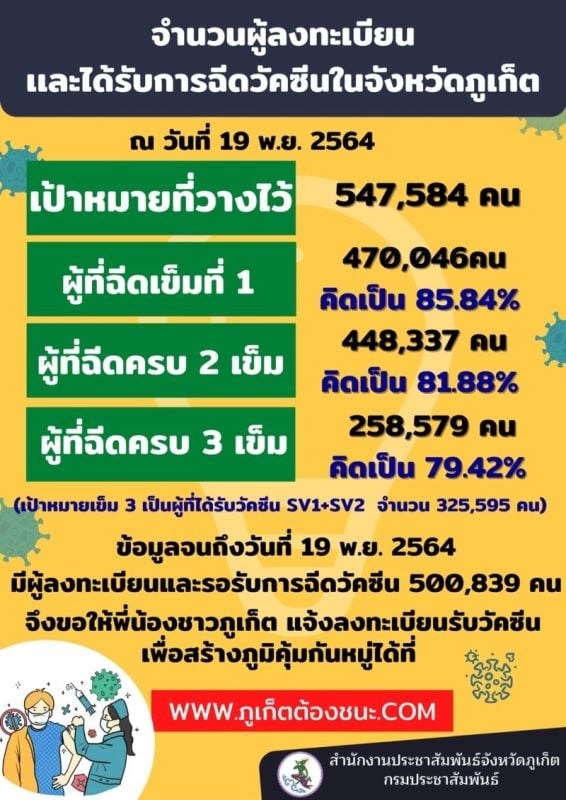 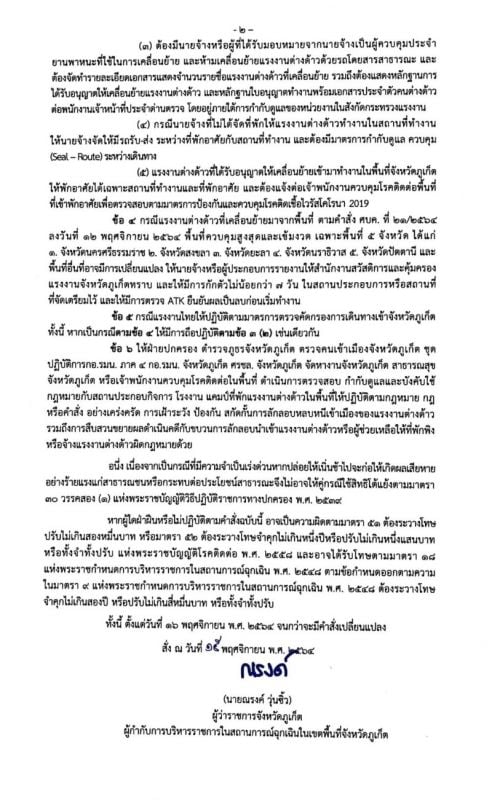 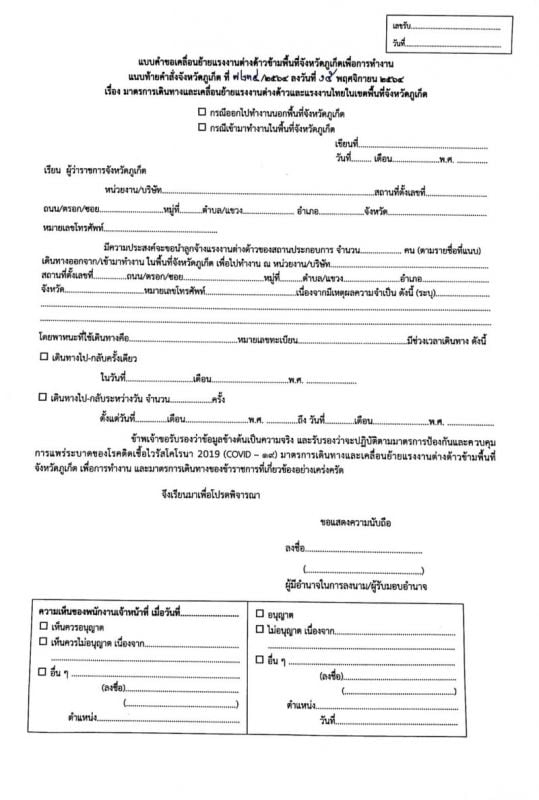 The call for “business owners” to bring migrant workers who have not been vaccinated to be vaccinated at government hospitals was issued by the Phuket Provincial Health Office (PPHO).

The workers may be brought to Vachira Phuket Hospital, Chalong Hospital, Patong Hospital, Phuket Provincial Hospital and Thalang Hospital every Monday-Friday from 8:30am to 3:30pm, “except for lunch break”, the PPHO announced.

“However, if it is an AZ [Astrazeneca] vaccine, registration is required,” the notice added.

The move comes after a week of announcements by Phuket officials regarding migrant workers in Phuket, confirming all migrant workers must be registered, and any movement of migrant workers into Phuket must be first approved by the Phuket Labour Office ‒ both conditions that have been legally required already for a long time.

Migrant workers entering Phuket from Nakhon Sri Thammarat, Songkhla, Yala, Narathiwat and Pattani “and other areas subject to change” must be reported to the Phuket Labor Protection and Welfare Office and quarantined for not less than seven days in a pre-arranged location, and a negative ATK test must be performed prior to commencement of the procedure, the order confirmed.

The call for business owners to present their migrant workers also follows months of intensive efforts by local officials to track down and ensure all migrant workers on the island have been vaccinated for COVID-19.

The crackdown saw camps locked down under the “Bubble & Seal” mandate, not allowing any migrant workers to leave their camps or other “provided worker accommodation” after 6pm at night, and migrant workers were tested and vaccinated en masse at worksites across the island.

No explanation has been provided as to which migrant workers in Phuket would not have been presented for vaccination, though it comes as thousands of Myanmar nationals have been pouring across the border into Thailand in recent weeks, mostly to seek work.

The deluge of Myanmar nationals into Thailand comes as Phuket businesses have been slowly reopening since the entry requirements for tourists to enter the country were eased under the launch of the Test & Go scheme on Nov 1.

Before the pandemic, many businesses in Phuket were dependent on migrant workers in order to remain financially viable. Many local administrations and municipalities also rely heavily on foreign labour for much of the manual work required to be done.

Under current entry requirements, any people entering Phuket must be vaccinated with a vaccine recognised by the government ‒ or they must have tested negative for COVID-19 by RT-PCR method or antigen test kit (ATK) within seven days before arriving.

The current slew of announcements appear to explain everything except that migrant workers will be allowed into Phuket to work, and if they are not already vaccinated, then the provincial government will ensure that they will be.

The tacit "imported migrant worker vaccination campaign" comes as the push to vaccinate island residents appears to have stalled, again.

According to the PPHO update for the mass-vaccination campaign, as of today (Nov 19), of the total 547,584 people recognised to be vaccinated (the total raised only after it was recognised the children 12-18 years old are to be included in the campaign), 470,046 people (85.84%) had received one vaccination injection.

Of note, while local officials recognise that 470,046 people had received at least one vaccination injection, the Phuket office of the Public Relations Department (PR Phuket) today also reports that in total 500,839 have registered to be vaccinated.

Phuket officials have yet to explain why those who have registered to be vaccinated are still waiting.

The mass vaccination campaign in Phuket in past weeks has slowed to a crawl, with the focus clearly on providing third-dose booster injections, not making any progress on providing first or second injections to those not vaccinated.

Phuket Vice Governor Pichet Panapong yesterday (Nov 18) chaired a small meeting attended by key officials and business leaders involved in migrant workers being brought onto the island, officially called the “Working Group on the Integration of Cooperation in the Inspection of Employment and Working Conditions and Labor Trafficking in Persons in Fisheries and Related Enterprises”.

The aim of the meeting was to set goals for local officials for 2022, “to accelerate key projects in line with the policy of the government to take good care of the labour sector against human trafficking in order to upgrade Thailand to Tier 1”.

Much of the discussion at  the meeting, held at the Phuket Labour Protection and Welfare Office, focussed on migrant workers in Phuket’s fishing indutry.

It was reported that 1,923 migrant workers were currently working in the local fishing industry, operating out of 18 piers and ports in Phuket. Of those 1,877 were Myanmar nationals, 43 were Cambodian nationals and 25 were Laos nationals.

Vice Governor Pichet pointed out that Thailand remained on the Tier 2 Watch List of the 2021 Trafficking in Persons Report released by the US State Department in July.

That was an improvement on last year, Vice Governor Pichet noted.

The TIP report marked, “The Government of Thailand does not fully meet the minimum standards for the elimination of trafficking but is making significant efforts to do so. These efforts included taking steps to improve coordination with civil society in trafficking investigations and victim protection, organizing trainings and workshops for prosecutors and judges on trauma-informed procedures, and initiating investigations of nine officials allegedly complicit in trafficking crimes.”

However, the report also noted, “Corruption and official complicity facilitated trafficking and continued to impede anti-trafficking efforts. NGOs’ perceptions of corruption made them reluctant to work with the government or certain agencies in some cases. Some police may have purposely compromised investigations and failed to provide prosecutors sufficient evidence to prosecute trafficking cases. Some law enforcement officials were reluctant to investigate influential boat owners and captains, as well as other offenders who were or had connections to high-ranking government officials. However, observers reported DSI officers resisted intimidation by influential individuals connected to trafficking cases.”

“The Thai government attaches great importance to anti-human trafficking, which is on the national agenda. This action in Thailand is for the benefit of Thai society and to raise standards of protection and prevention of Thais, foreigners and migrant workers in Thailand from becoming victims of human trafficking,” he said.

Of note, the importance follows the threat of economic sanctions against Thailand if it does not improve its efforts against human trafficking. The EU has already previously suspended seafood imports from Thailand over the human rights issue. After further reviewing Thailand’s efforts, the EU later revoked its ban on Thai seafood.

“In this regard, tackling human trafficking in Thailand has made concrete progress over the past several years,” V/Gov Pichet said.

“Thailand also saw significant qualitative improvements in all three areas. Prosecution was more efficient and less time-consuming with more than 90% of the trials being completed within a year; the punishment for offenders is higher, more than 67% of all offenders served five years in prison. There is a focus on prosecuting government officials who have committed offenses. and a new form of online anti-trafficking in persons during the COVID-19 situation,” he said.

“Protection of victims of human trafficking still adheres to the principle of victim-centred (victim-centred approach) and taking into account the trauma (trauma-informed care) by integrating cooperation with civil society in providing services and protection for victims; especially the management of the work of foreign workers of three nationalities, which under the COVID-19 situation saw the number of 240,572 people allowed to stay in the Kingdom and work until March 31, 2021 has been extended, enabling workers to be protected/entitled by law and reduce their risk of becoming victims of human trafficking,” V/Gov Pichet continued.

“Relevant legislation has been passed to raise labour standards such as raising the standard of living, fishing boat facilities and facilitating the issuing of seamen’ books [registration documents]. There is also training to develop the potential of law enforcement personnel related to the prevention and suppression of human trafficking, and continually raising awareness among vulnerable groups to prevent human trafficking through various channels,” he added.

“Policies and guidelines for government service, through the Department of Labour Protection and Welfare, with urgent policies for the year 2022 are to prevent and solve the problem of human trafficking in labour with fairness in order to move towards Tier 1, drive important projects in accordance with the policies of the government and the Ministry of Labour, such as the Factory Sandbox, and promotion of labour relations system of labor unions, and the development of strong Draft Ministerial Regulations for the safety officers at work and upgrading Thailand to Tier 1,” he said.

“For the year 2022, Phuket Province, through the Phuket Provincial Labor Protection and Welfare Office, has set a project for integrating labour governance in fishing boats in 22 coastal provinces through two campaigns, operated from mid-December 2021 to early March 2022,” V/Gov Pichet revealed.