PHUKET: Phuket Vice Governor Supoj Rotreuang Na Nongkhai has been transferred out of Phuket among the regular annual transfers announced each year for Oct 1. 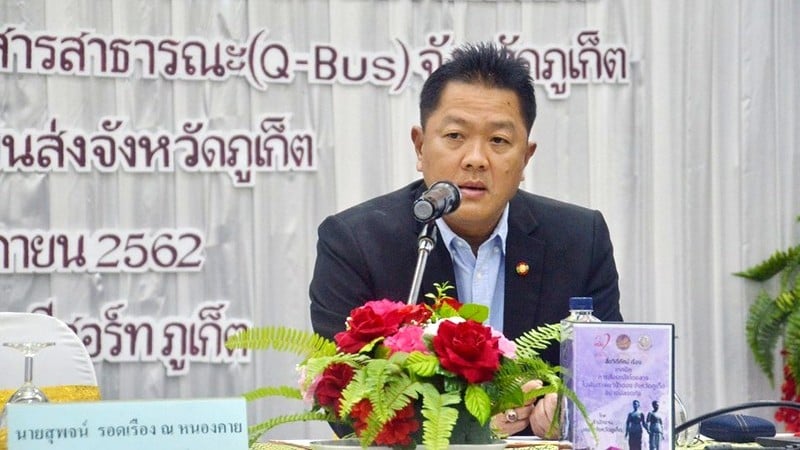 Mr Supoj will move to Pathum Thani province, which forms the northern part of the Greater Bangkok area, where he will take up the post of Vice Governor on Monday (Nov 2).

As is tradition for officials either arriving or departing the island, Mr Supoj together with other Phuket officers paid homage to the statue of King Rama V in front of Phuket Provincial Hall yesterday morning (Oct 29).

After the ceremony, Mr Supoj made his formal farewell to fellow officials.

Mr Supoj’s transfer out of Phuket leaves the island with just one Vice Governor, Pichet Panapong, still standing after Vice Governor Wongsakorn Nunchukan was transferred to his home province of Songkhla earlier this month.

To date, replacement Vice Governors for Mr Supoj and Mr Wongsakorn have yet to be announced.

During his one year as Vice Governor in Phuket, Mr Supoj was tasked with spearheading many key issues and investigations delegated to him by previous Phuket Governor Phakaphong Tavipatana.

Mr Supoj often took a hands-on role, personally looking into many key issues and generating a reputation of trust. He admitted many faults on the island so that they could be addressed, including the issue that falling street prices of drugs were contributing to rising drug use amongst youths in Phuket, and the issue of motorbike rental operators renting out large motorbikes to tourists unable to control the powerful machines.

He was also tasked with leading the provincial investigations into key issues, including the probe into the construction of The Peaks condo development in Kata, and personally requested that the Ministry of Tourism & Sports draft a ‘red flag law’ to empower lifeguards to enforce ‘red flag’ bans on people entering dangerous surf at Phuket’s beaches.

Among his final duties as Vice Governor before leaving the island, Mr Supoj presented himself to pro-monarchy supporters who had gathered in front of Phuket Provincial Hall yesterday morning, when he was handed a formal request he was asked to present to the mobile Cabinet meeting to be held in Phuket next Tuesday (Nov 3).