A Meal With: Optimism 101 – The delights of the Nai Harn Resort

A Meal With: Optimism 101 – The delights of the Nai Harn Resort

Driving over to Nai Harn Beach to have lunch with Frank Grassmann, the friendly General Manager of the iconic Nai Harn resort which sits on a verdant hillside proudly overlooking those wondrous southern Phuket sands, I made a mistake! 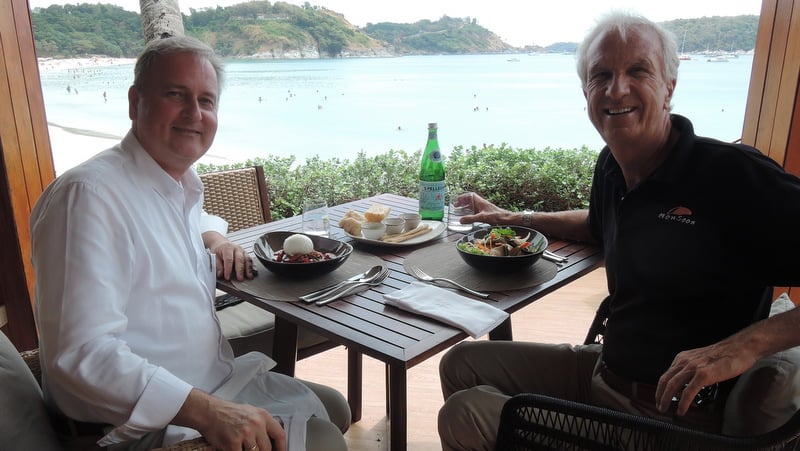 I tuned into the car radio local news and was deluged by an auditory barrage of negativity running the gamut from panic and obfuscation about the growing coronavirus crisis, to the latest speedboat crashes, to the pollution and black water problems on various beaches, to the ever-present drug and road mayhem imbroglios that seem to be a hallmark of life in Phuket.

I was due to meet Frank in their delightful beachside Rock Salt Restaurant to talk about the region’s tourism future. With this tidal wave of catastrophe as a backdrop, my spirits sank. However, I shouldn’t have worried, because Frank proved to be a beacon of well-informed positivity in the face of all this bad news and spelt our many ways in which Phuket’s tourism can continue to grow and succeed despite the undoubted problems of the present.

Frank was born in the charming German town of Koblenz on the Moselle River and very nearly became a Lufthansa pilot before settling into a career in hotel management. He served his apprenticeship at the Albrecht Durer Hotel Management School in Dusseldorf before embarking on a globetrotting career which has gone from strength to strength.

Frank is uniquely qualified to speak with authority on the future of the region’s tourism, having spent over 30 years in increasingly senior roles in the industry, both in Thailand and around the world. We sat down to a delicious lunch in Rock Salt consisting of their signature fresh, healthy produce all expertly-prepared under the watchful eye of Executive Chef Mark Jones.

This is a location that positively reeks of optimism and beauty, adjacent to the majestic sweep of Nai Harn’s sands which were still abundantly populated by happy visitors, swimming, paddle-boarding, playing beach volleyball, or just soaking up the sunshine.

At the far end of the beach, towering craggy headlands bracketed this luxuriant scene with Prom Thep Cape and the romantic islet of Koh Man dreaming in the heat haze beyond.

Says Frank, “The Andaman region is uniquely situated geographically at the centre of a huge catchment area of potential in-bound travellers and offers an exotic culture and inherent style of service and attitude that is second to none.

At The Nai Harn we always hire new staff based on attitude before skill set, because we know that our excellent training can imbue the necessary skills, but a happy, helpful, team-player attitude is all important in this business.

“We also take our social and environmental responsibilities very seriously. We hire and train as many locals as we can and we have been honoured with the Gold Medal of the prestigious Green Hotel Award for our enduring commitment to best environmental practices and sustainability in everything we do.”

I asked Frank about the heritage of this iconic resort and its unique location Phuket. “We are now four years into our re-branding and relaunch and have been able to combine innovation and modernity into the fabric of this most iconic property which, as the Royal Phuket Yacht Club, was graced by a guest-list including both royalty and artistic legends such as Rudolf Nureyev, Peter Ustinov and Roger Moore.

“Our restaurants and all the guest rooms have been extensively remodeled and our culinary and beverage offerings have been hugely enhanced by such experts as Salim Khoury from The Savoy in London who created a range of signature cocktails, and wine legend James Suckling who helped craft the extensive house list.”

Reluctantly departing this enclave of optimism within our current sea of troubles, I had a smile on my face and was at pains not to make the mistake of turning on the car radio on the way home.

While the word “infectious” should perhaps be used with caution in our present crisis, it certainly seems highly appropriate when applied to Frank Grassman and The Nai Harn’s particular brand of optimism!