Yes! We Have No Bananas: A walk through of Thailand’s popular potassium produce

Yes! We Have No Bananas: A walk through of Thailand’s popular potassium produce

I was talking recently about gar­dening to an English lady visiting Phuket and the subject of banan­as came up. “Do you know,” she enthused, “that banana skins put around the roots of rose bushes, promote better growth?” 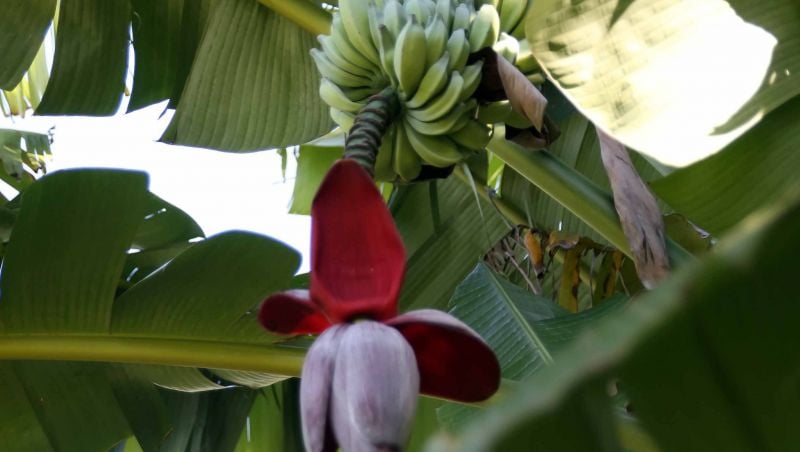 “No,” I replied in surprise. But then I wouldn’t have known that, since bananas were like gold dust in my childhood, and my father’s 150 or so hybrid tea roses had to make do with dollops of cow muck carted in by wheel­barrow from the field next door. In fact the first banana I remember eating was when I was 10 years old.

The lady’s tip is a good idea for Phuket’s rose lovers though – that is if you are brave enough to try cultivat­ing what is essentially a cool-climate shrub in a tropical climate. After all, banana skins are common enough here – both literally and metaphorically. Wild bananas (or kluay in Thai) grow everywhere in Phuket, taking over hill­sides, secondary forest and even waste ground. Drive the coast road from Rawai to Kata and you will see banana trees everywhere.

And widely available hybrids make an excellent choice for the gardener with a new property and a bare plot, since they will not only thrive in full sunshine and relatively shallow soil, but will shoot up fast enough to provide shade for less robust plants. Commercial growers ap­ply a nitrogen-rich N3: P1: K6 fertiliser.

Appearances, however, can be de­ceptive. Most wild bananas are full of seeds or are suitable mainly for cooking. Seedless or parthenocarpic commercial varieties owe their existence to hy­bridisation. Even so, flavours can vary enormously – from mild, almost taste­less varieties to sweet and even slightly acidic ones. Some have dense flesh, while others are soft and floury.

In fact there are more than 200 kinds, grown in no fewer than 107 countries. The world’s most popular fruit. All, however, ultimately trace their origins back to two wild species, musa acuminata and musa balbisiana. Popular among Thais, short and stubby balbisianas owe their popularity to a sharp, astringent taste when green and young, a characteristic which makes them a useful accompaniment to pad thai noodles, certain kinds of nam prik and nam nuang. Both the flower – which has an artichoke-like flavour – and the stem are also used in Thai cuisine, and the leaves perform a range of functions from packaging for sticky rice and other snacks to roofing material.

Most tropical countries differenti­ate between green plantains which are more starchy and generally used for cooking, and dessert bananas which are sweeter and eaten raw. Thailand, which probably has more kinds than any other country, does not make this distinction. In fact the world’s leading commercial banana, the Cavendish, exported by such leading producers as Fyffes, is not generally available in the Kingdom. Coals to Newcastle.

The ones favoured here, as a dessert fruit eaten raw, are finger bananas, which are usually bought when green and allowed to turn yellow. Quite small, they possess a sweet, perfumed flavour and are delicious. They are best eaten when the yellow skin is beginning to develop brown spots. At the other end of the scale are “king” or “rajah” bananas which may be as much as 18 inches long.

Bananas are unusual plants. They look like trees with their straight trunks and palm-like leaves, but in fact they are herbaceous, flowering perennials. What appears to be a woody trunk is in fact a stem of toughly packed sheaths. Cut a cross-section through the soft, water-laden tissue and it will resemble the layers of an onion.

Once mature, the banana plant will produce a huge, sexy-looking purplish flower spike which will in turn bear fruit – up to 100 or more on a single plant. Slowly the parent plant will then expire, but suckers or offshoots from the underground roots will develop into new plants. Provided there is enough depth of soil (a minimum of 60 centimetres), the banana will continue to generate new growth.

Many health benefits accrue from eating bananas. They are currently fashionable among sportsmen, espe­cially tennis players, as an instant energy provider, since they contain three natural and readily assimilated sugars – sucrose, fructose and glucose. Rich in vitamin B6, they also contain manganese, potassium and vitamin C. People who suffer from cramp swear by them, and they are known to be good for the heart, nervous system and kidneys. Above all they are affordable, conveni­ent, ubiquitous and relatively low in calories.

For the small garden, the decora­tive cultivars are the best bet. Grown for their ornamental value, they are generally much smaller and more man­ageable. They may be cultivated either for their handsome foliage or for their attractive flowers. For example, Su­matrana has leaves which are maroon underneath and green above. More popular is M. uranoscopus which has the characteristic, tightly sheathed flower at the end of an upright spike. But the flower, surprise, surprise, is a brilliant red. M. ornata has flowers that range in colour from lavender to deep purple. And on M. velutina, the bracts are pink­ish and are succeeded by pink, velvety fruits. Most unusual… Bananas are rel­atively easy to propagate by dividing up the fleshy roots. In fact the root systems are not as large as one might expect. An­other bonus…

If you need some ordinary banana plants, you can find them just about anywhere. They are considered lucky in Thailand, and a neighbour will probably be prepared to give you a few. But if you want to obtain the ornamental varieties, you will need to visit a good plant nurs­ery. But these cultivars are becoming increasingly popular in Thailand – and rightly so.

Yes, we do have bananas – and oodles of them.

Patrick has been writing for 10 years about gardening in Phuket and allied topics. If you have horticultural or envi­ronmental concerns, please contact him at drpaccampbell@gmail.com. Many of his earlier creative and academic publi­cations can be found at Wordpress: Green Galoshes.