PHUKET: A 34-year-old woman was impaled by a steel rod protruding from a power pole in a motorbike accident on Wichit Songkram Rd in Kathu in the first hour of this morning (May 13). Ms Khanuengnit was rushed to hospital with a section of the steel rod still through her chest. Photo: Eakkapop Thongtub 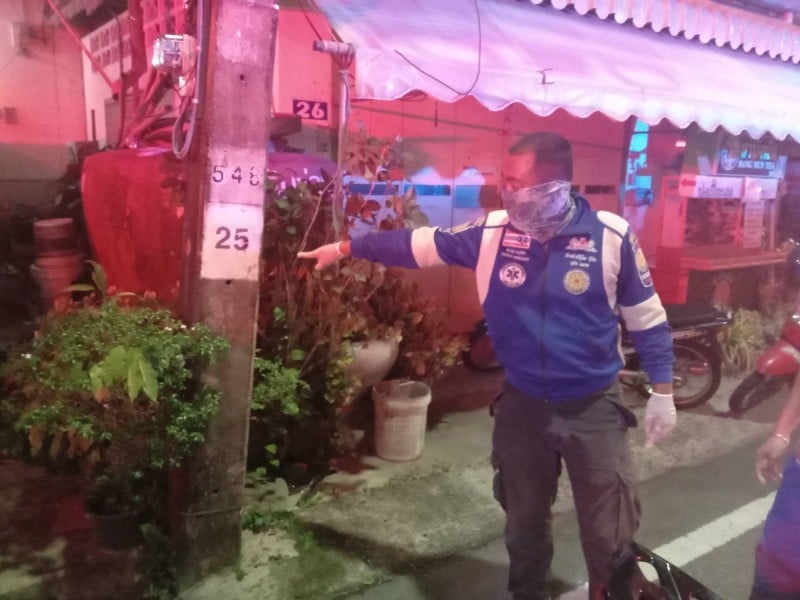 The motorbike Ms Khanuengnit was riding when she struck the power pole. Photo: Eakkapop Thongtub

Lt Adisorn Juhong of the Kathu Police was called to the scene, on Wichit Songkram Rd northbound between Kathu Municipality and the Kathu Shrine, at about a half past midnight.

Police together with rescue workers from Kathu Municipality arrived at the scene to find Khanuengnit Onoaun, 34, still attached to the power pole, impaled through her upper chest by a steel rod that electrical workers use to climb the pole when carrying out repairs.

“The steel rod had gone through her and was sticking out about two inches out of her body,” Lt Adisorn told The Phuket News.

Nearby was the black-pink Honda Click motorbike Ms Khanuengnit was riding at the time of the accident with heavy damage to its front.

She was rushed to Vachira Phuket Hospital with the rod still through her chest.

Lt Adisorn explained that footage from CCTV cameras in the area showed Ms Khanuengnit was riding at speed from the Kathu intersection, at the junction with Phra Phuket Kaew Rd, when it appears she may have fallen asleep and hit the power pole.

“At this stage, I have not received any update of Ms Khanuengnit’s condition from the hospital. I will call to check soon.” Lt Adisorn said.

“We will question her about the incident after she is discharged from the hospital.” he said.