THAILAND: The country appears to be on target to increase its wild tiger population by 50% over the next two years. 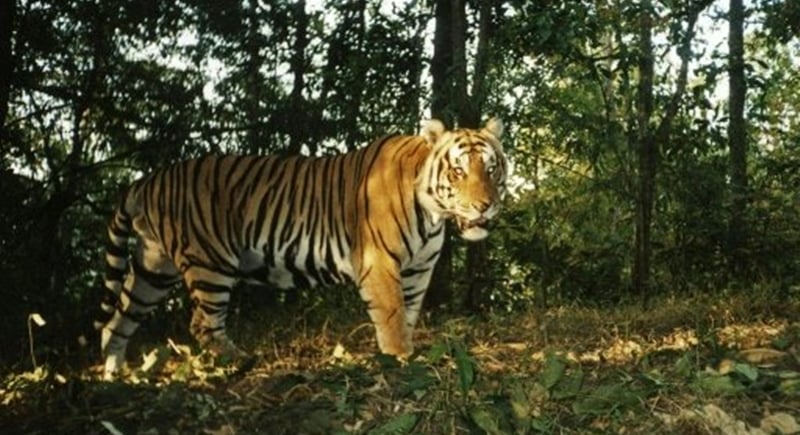 The optimism is due to the growing numbers of the big cats in the western forest complex, where the population is now more than 100, according to a tiger expert.

Saksit Simcharoen, head of the wildlife research division of the Wildlife Conservation Office and Thailand’s top tiger expert at the Department of National Parks, Wildlife and Plant Conservation, has praised a new smart patrol system that is perfectly protecting the animal’s habitat.

Mr Saksit said the scheme had become a key factor in increasing the wild tiger population in the highly protected forest areas.

The number of tigers has increased from 46 to 71 at the Huai Kha Khaeng Wildlife sanctuary in the western forest complex, from 10 to 18 in the Dong Phayayen-Khao Yai Forest complex and 10 more had been found for the first time at the Salak Phra Wildlife Sanctuary, Sai Yok National Park and Erawan National Park in Kanchanaburi province.

It is estimated that there are around 3,000 wild tigers around the world. Thailand is the world’s largest source of Indo-China tigers with a population of about 100, followed by 22 tigers in Myanmar but zero in other neighbouring countries.

“The country’s western forest complex is a significant bridge linking tigers from Thailand to Myanmar and strengthening the species in the long run,” said Mr Saksit.

The department will next Wednesday host an exhibition themed the “Roar of the Thai Tiger”. Many other showcases for tiger protection and conservation will also be presented to the public from July 25 to Aug 2 at the Bangkok Art and Culture Centre (BACC).

Prakit Vongsrivattanakul, the parks department’s deputy chief, said the two main tiger populations were at the western forest complex and Dong-Phayayen-Khao Yai. He agreed the smart patrol system had become a significant tool in protecting the animals and said data collected by park rangers was providing important information about the areas most at risk from hunters and poachers.

Regarding the tigers confiscated from Wat Pha Luang Ta Bua Yanasampanno in Kanchanaburi’s Sai Yok district, he said that just 51 out of 147 were still alive. Most of the deaths were due to illness.

However, the number of deaths had stabilised, with the most recent death there, in October last year. All now are living in more hygienic conditions under the good care of department staff.

He added that his department had collected DNA information from all the confiscated tigers and found that most had been in-breeding and such conditions weakened their bodies and led to many deaths. The same tests also found that some had been illegally smuggled into Thailand.

The department confiscated 147 tigers from the temple in 2016 due to the animals being kept there illegally.

Legal action was also taken against the temple.

Again DEK is passing by the truth with dark intention to damage another reader. ( let reader say wha...(Read More)