SAMUT PRAKAN: A motorcyclist believed to be flying high on drugs sneaked through a gate and onto the aircraft apron at Suvarnabhumi airport, a highly restricted area, causing 10 minutes of havoc on Tuesday (May 3). A screen capture from a video clip shows a security guard chasing Vachara Khambut inside the restricted airport site. Image: via Bangkok Post 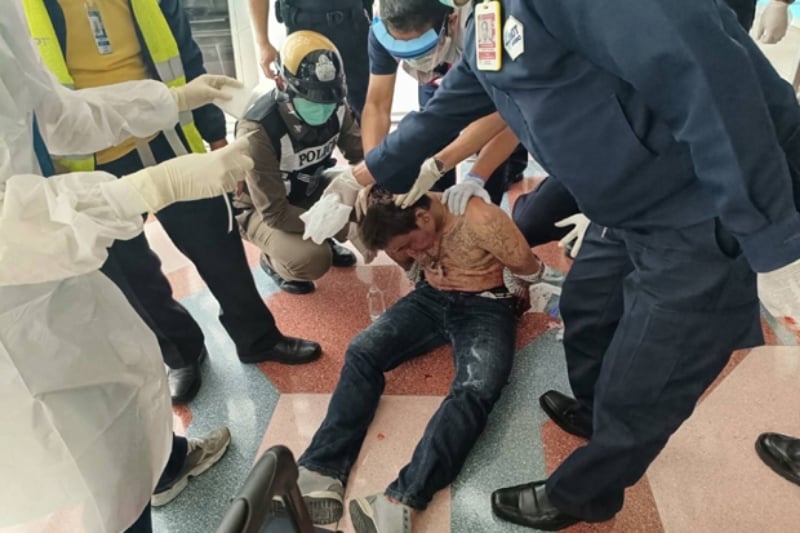 Vachara Khambut is arrested at the walking bridge of Gate 3A at Suvarnabhumi airport on Tuesday. Photo: Sutthiwit Chaiyutworakan / Bangkok Post He was chased down and arrested by security guards, and is facing serious charges, reports the Bangkok Post.

He said that at 11.53am on Tuesday a man was spotted riding on a motorcycle in the restricted apron area. He had slipped through a gate for officials working at the airport as a pickup truck was entering.

The man, later identified as Vachara Khambut, 34, from Loei province, pointed a handgun and ordered  the guards to step back while driving towards the airport apron, he said.

The airport’s security centre was alerted and monitored the man’s movements with closed-circuit security cameras. They showed the man running wildly around near aircraft parking bay No 101, carrying a steel axe.

Airport security guards were sent to catch him.

They were able to arrest the intruder at 12.03pm as he was trying to enter a passenger building after climbing up a ladder onto the walking bridge of Gate 3A and smashing a glass door.

Guards took from him a steel axe about 50 centimetres long, a replica handgun, a pair of scissors and a methamphetamine pill in a plastic box.

The man was slightly injured by broken glasses while smashing a door to enter the passenger building. Some security guards also sustained minor injuries.

He said everything went in accordance with international practice at airports.

Mr Kittipong said the incident did not disrupt airport services or flights.

The incident was captured on video and the clip went viral on social media on Tuesday. Mr Kittipong later confirmed it and the airport posted a statement on its Facebook account around 10pm.

Asked why the airport and police were so late in releasing details after the incident, Mr Kittpong said on Wednesday that Mr Vachara was apparently high on drugs and was initially unable to give a coherent statement or answer questions.

The man was detained at Suvarnabhumi police station.

The charges included trespassing on the airport’s restricted area and violating Section 19 of the Aviation Act of 2015 in carrying a weapon in a way that might affect the safety of the airport. The second charge carries maximum penalties of death or life imprisonment, a prison term of 15-20 years and a fine of B600,000-800,000.

Other charges were damaging airport property by breaking two glass door panes at the passenger building, possessing weapons in a public place, possessing methamphetamine, taking an illicit drug and threatening people with weapons.