PHUKET: A woman at a construction camp in Thalang yesterday (May 24), outraged that her husband remained drinking with a friend instead of repairing an electric fan as she had repeatedly asked, attacked her husband with a bottle, leaving him with a serious gash to his head. Stabs to his chest with the broken bottle also left him with a punctured lung. 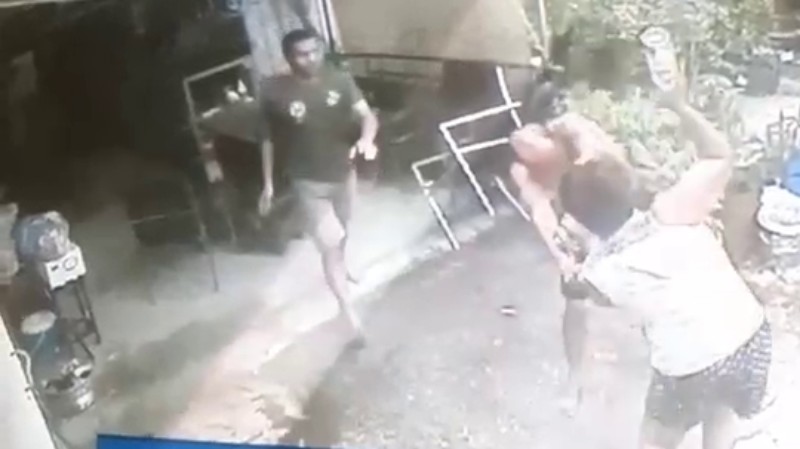 Ms Sunthorn kneed his wife in the stomach twice during the fight. Photo: Eakkapop Thongtub Mr Sunthorn suffered a serious gash to his head and a punctured lung in the attack. Photo: Eakkapop Thongtub The broken neck of the bottle Mr Sunthorn was stabbed with. Photo: Eakkapop Thongtub Police have yet to confirm which charges Ms Chanchira will face for the attack. Photo: Eakkapop Thongtub The broken fan that inspired the attack. Photo: Eakkapop Thongtub

Lt Phattarakorn Pongpaiboon of the Thalang Police was called to the scene, in Moo 7, Srisoonthorn at 1pm.

Arriving at the scene, police and rescue workers found the man, Sunthorn Petthong, 37, a garbage truck driver for Kathu Municipality, with blood streaming from his head. Sunthorn was holding his hand over one of the wounds to his chest.

He was rushed to Thalang Hospital, where it was confirmed that one of his lungs had been punctured, prompting doctors to have him taken immediately to the better-equipped Vachira Phuket Hospital in Phuket Town.

At the scene of the stabbing, Chanchira Boonkong, 31, from Phitsanulok, surrendered to police and was taken to Thalang Police Station for questioning.

The couple had been together for more than 13 years, and had three children, one 10 years old, another eight years old and the youngest just four years old, said Lt Phattarakorn.

"Mr Sunthorn was drinking beer in front of the house with his friend Sanan Wongkaew, 41, when Ms Chanchira came up to ask him to fix the fan in their room, but he refused,” he explained.

Ms Chanchira later sent Mr Sunthorn a message by LINE telling him to fix the fan, he added.

"But he still did not go. She got angry, and walked up to him from behind and started hitting him on the head with an empty Sangsom bottle,” he said.

During the fight, the bottle broke and Ms Chanchira stabbed her husband in the chest several times, Lt Phattarakorn explained.

The attack was caught on CCTV, which showed that while Mr Sanan was grappling with Ms Chanchira to stop her attack, Mr Sunthorn took the opportunity to knee his wife in the stomach twice.

Lt Phattarakorn said that he had yet to decide on which charges Ms Chanchira is to face.

“I first need to be sure of the injured husband’s condition and receive a report from the doctors before we can file the correct charges,” he said.