Long before COVID, expats caught out without health insurance were trapped in nightmare scenarios, some of which have become island legend. Bruce Stanely here recounts some of those tales of woe, and explores how to remedy the problem. 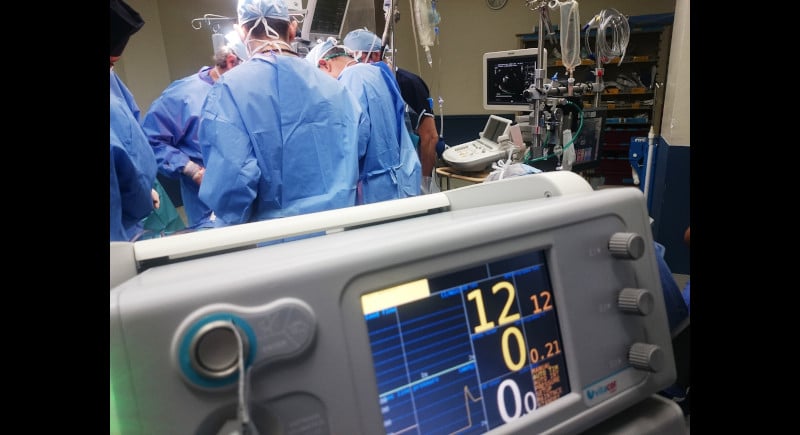 Eric Dohlon at the ready in his office.

It was one of those familiar phone calls that make me sad. “Can you help us? We’ve found our friend Jonathan unconscious in his room and don’t know what to do.”

“We put him in our truck and took him to the Vachira government hospital. But when he became conscious, he told us that he had medical insurance and to please take him to an international hospital.”

I then learned that no one knew where Jonathan had put his medical insurance card, ATM card or passport. Fortunately one of the international hospitals accepted him but asked for a B50,000 deposit for his initial care. His friends all donated enough to get him admitted.

Within a short time, a scan revealed that he had a growth on his liver and other complications that would require some extensive intervention. The hospital contacted his overseas health insurance company to be told they would not cover what they determined to be a pre-existing condition. Jonathan’s friends were asked to cover his medical bills that would eventually amount to many hundreds of thousands of baht. When there is no guarantee of payment, the patient is moved to the government hospital.

This disturbing story is not unusual. There are thousands of expats from around the world who stay both short and long term on Phuket with inadequate if no health insurance. Most say they will self-pay if they have a problem. That may have been feasible 20 or 30 years ago when the costs for medical care were more affordable, but due to rapidly rising hospital charges, only a fraction of Phuket visitors and residents can afford their medical bill.

When I came to Phuket almost 30 years ago to work at the newly developed Prince of Songkla University Phuket campus, I was given the job of working with the Tourism Authority of Thailand to help foreigners from all countries in distress. Much of my work was the often delicate negotiations between foreigners and the local police when there was an accident. The other part was helping to find medical care for an injured visitor. In those days, there were no international hospitals on the island. The choice then was Vachira or Mission hospitals and a few much smaller clinics, and none of them had much medical technology. I remember one Swiss fellow who got run over on his motorcycle by a 10-wheeled truck and had a leg broken in many places. He was advised to take a bus to a hospital in Bangkok if he wanted to save his limb.

We’ve come a long way since then and the island can now boast an international standard of care, but it comes with added costs that the sick and injured are expected to pay ‒ and that means an adequate insurance policy.

“At an international hospital, the patient must have a direct relationship with their insurer. We can help arrange and settle a claim, but the patient must make sure they have proper coverage to pay for their injury,” a very experienced claims officer tells me.

When the insurance company is based abroad, there can be problems with the insurer unfamiliar with the costs and medical procedures of an injury in Thailand. This is why the Thai government recommends using a Thai-based insurance company as the hospitals can more easily help the injured and distressed settle their bill.

On Phuket, Eric Dohlon, Managing Director of Bangkok Insurance Brokers (BIB), has been providing health and accident insurance for 20 years. He is an advocate for especially older expats who need an affordable policy that covers their medical care. He keeps himself informed about his clients’ condition in the hospitals and attends their social gatherings and funerals. He works in the best interest of his clients who can easily meet him to discuss their medical insurance needs.

“There is a wide variation in prices for what hospitals charge. Many are profit driven and they regularly raise their prices when they think an insurance company will pay. These higher charges then cause insurance premiums to escalate beyond what clients can afford,” explains Eric.

“I always advise my clients to shop around Thailand for non-essential medical care because the savings can be significant. They should also talk with their insurance company to determine exactly what they will cover. Otherwise the client will be responsible for any shortfall. Also it is wise to negotiate the final bill after a medical procedure as the hospital has flexibility particularly for patients without adequate medical coverage.”

There are often medical emergencies on Phuket such as Richard who was happily living at Patong Beach in retirement when he fell ill. Normally, a high dosage of paracetamol took care of his discomfort. But inevitably it didn’t and he was taken to Vachira Hospital to learn his kidneys had stopped working. He was put on dialysis and soon had a large bill. When he advised the hospital to get funds from his bank, he discovered that his live-in girlfriend had emptied his retirement savings account and disappeared. Without dialysis he would die. He had no family back in his native England but was able to scratch together enough money for a one-way ticket to London. He returned to Heathrow airport in a wheelchair and into the care of the National Health Service (NHS).

“Health insurance is important but also an inexpensive accident insurance policy will allow easy admission to the hospital in case of vehicle, motorcycle or other unexpected injury.” Eric explains.

I recall an expat musician on the island who had a fall in his shower, hit his head and totally lost his memory and eventually had to be repatriated to his home country. And the young woman who had a tragic fall down some stairs at a Patong club whose brain was seriously damaged. While both had accident insurance, they unfortunately did not have repatriation coverage to their home countries.

Not so lucky was Greg, a semi-professional cyclist who was hit by a speeding truck in Rawai and left for dead on the side of the road before being rescued by a passing Thai family. They drove to several hospitals who asked to see proof of medical insurance before they would accept him.

Thailand is the second most dangerous country in the world just behind South Africa for traffic fatalities. It’s no secret that many local people as well as expats drive without training or under the influence of a staggering variety of mind altering substances. Many tourists think Phuket is the perfect place to learn to drive a motorcycle with no license or swim in the warm sea ignoring the warning red flags blowing in the wind. It’s all a perfect setting for disaster for those who are not careful.

Jonathan’s condition improved after two weeks in a virtual coma. He was eventually discharged from the international hospital with a medical bill of B1 million. He plans to pay it off monthly and hopefully find medical insurance that will cover any future relapse.