PHUKET: Disaster officials in Phuket have been ordered on alert after strong wind and rain lashed the island overnight, with a warning for more heavy weather reissued this morning (Oct 29) as tropical depression Molave makes its way across Northeastern Thailand. 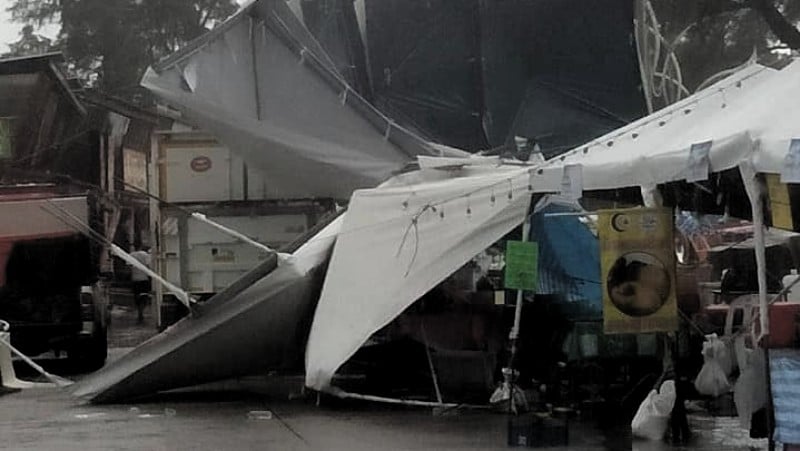 Wind speeds of nearly 40km/h tore down tents and a marquee set up for a food festival on Karon Beach, while at the airport wind speeds up to 44.5km/h were recorded.

So far no serious incidents have been reported in Phuket, but flooding was reported in six provinces on Wednesday, with heavy rain and flash-flood warnings for all five regions of the country into Friday.

The Department of Disaster Prevention and Mitigation (DDPM) said flooding triggered by days of heavy rain and runoff had hit 2,299 villages in 140 districts of 34 provinces across the country since Oct 7, reported the Bangkok Post.

The weather warning reissued by the Thai Meteorological Department this morning noted that Tropical Storm “MOLAVE” had been downgraded to a Category 2 Tropical depression and was now centred over Ubon Ratchathani, with maximum sustained winds of about 55km/h and moving west at about 25km/h.

Molave was expected to be soon downgraded further to a Category 1 active low pressure system, but Isolated heavy to very heavy rain with strong wind remained forecast for all of  upper Thailand.

Meanwhile, strong southwesterly winds prevail over the Andaman Sea, the South and the Gulf bringing about isolated heavy rain with strong wind in the South, the warning noted.

“All ships should proceed with caution and keep off thundershowers while small boats keep ashore,” it added.

The heavy weather is currently forecast to continue through tomorrow (Oct 30).