FORMULA ONE: Reigning champion Max Verstappen scored his first points of the season with victory over Charles Leclerc at the Saudi Arabian Grand Prix yesterday (Mar 27). 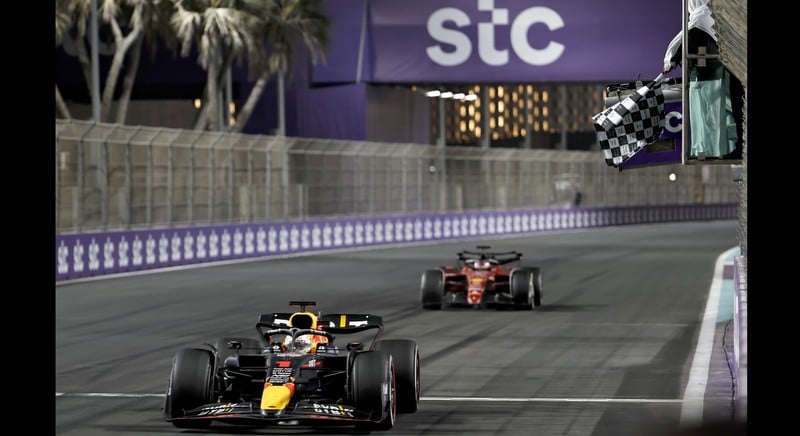 The Dutchman launched a late assault on the Monegasque after a virtual safety car disrupted momentum at the front with just over 10 laps to go.

The pair sparred five times at the penultimate corner, which at the Jeddah track sets up who has the benefit of the slipstream on the run down to the first corner.

Verstappen tried first to sweep around Leclerc’s outside on lap 42, but the Ferrari driver got him back easily before the first turn thanks to DRS. The Dutchman tried again on the following lap, and this time both drivers hit the brakes hard early to avoid being first into the corner - but Leclerc took advantage of Verstappen’s lost momentum to power out early and maintain his lead anyway.

The Red Bull Racing driver was becoming frustrated, and he was told by his engineer to keep his head down and focus on the task and hand. He cooled himself for a couple of laps before his next attempt, and this time he timed his run through the last sector to ensure he was nose to tail with the Ferrari through the last corner. It gave him great drive on exit plus the slipstream down the straight, and he took the lead into the first turn.

Leclerc tried to fight back, but yellow flags in the first sector prevented him from using the key overtaking zone, and at the flag Verstappen had managed to grid out a 0.5-second victory.

“It was really tough, but a good race,” he said. “We were battling hard at the front, but you start to play the long game.

“You could see in the end we had a little bit more pace, so I just tried to get by.

“It was tough, but I’m really happy we finally kickstarted the season.”

Charles Leclerc, still leading the championship by 12 points from teammate Carlos Sainz and 20 points from Verstappen, was thrilled with the race, even if he was disappointed by the outcome.

“It wasn’t enough today, but oh my god, I really enjoyed that race,” he said. “It’s hard racing but fair. Every race should be like this.”

Sainz came home third, albeit eight second off the lead, but the Spaniard considered that an advance on his difficulties trying to match Leclerc’s race pace.

“For me this race was a bit of progress from Bahrain,” he said. “I think I managed to find a bit more rhythm with the car. Still some more tenths to fins, but I’ll end up getting there.”

Poleman Sergio Perez finished fourth after leading the opening stint of the race but being undone by the safety car.

The Mexican was controlling the pace at the front when he made his opening pit stop on lap 15, but Nicholas Latifi crashed his Williams just one lap later, triggering a safety car that enabled the eventual podium-getters to make quicker tyre changes and get ahead of him.

“This is just racing, especially in this place,” the sanguine Perez told UK TV. “Things were looking really good, but unfortunately Latifi just put it in the wall at the wrong time for me.

“It will come around for me, but it hurts, because we did everything we could to win the race from pole.”

George Russell was a clear fifth for Mercedes, 20 seconds behind the leaders and 20 second ahead of the rest of the midfield.

Fernando Alonso and Valtteri Bottas retired with technical problems from sixth and seventh on the road, promoting Esteban Ocon and Lando Norris into those places, the pair split by just 0.107 seconds at the flag.

Daniel Ricciardo had been running between Ocon and Norris until he too retired with an engine problem late in the race.

Pierre Gasly was eighth for AlphaTauri ahead of Kevin Magnussen, and Lewis Hamilton rounded out the top 10 in a Mercedes he still can’t get a handle on.

The Briton started 15th but missed his ideal pit stop window thanks to a spate of late retirements closing the pit lane but was unlikely to finish higher than ninth.

“Is there even a point for that position?” Hamilton asked his engineer on his cool-down lap, summarising one of the worst weekends of his Mercedes career.