Vaccination registration opens for foreigners in all Phuket businesses

Vaccination registration opens for foreigners in all Phuket businesses

PHUKET: Foreigners working for any businesses in Phuket with a Phuket-registered address can now register to be vaccinated through the government mass-vaccination campaign.

COVID-19Coronavirustourismeconomicshealth
By The Phuket News 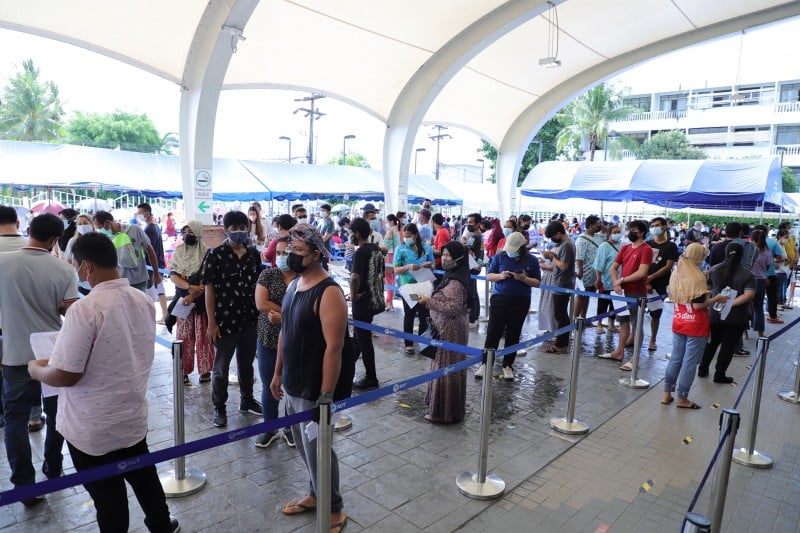 The news was announced during a press conference broadcast live online this morning (May 19).

Also present for today’s briefing were Ministry of Digital Economy and Society academic Pracha Asawathira and Dr Chayanon Pucharoen, Associate Dean for Research and Graduate Studies at the Faculty of Hospitality and Tourism at the Prince of Songkla University (PSU) Phuket campus in Kathu.

“The situation this week is better, as we have had single-digit numbers of daily new infected cases. Yesterday we had only two new cases, bringing the total number to 610 cases [since Apr 3],” Dr Kusak Kukiattikoon Chief of Phuket Public Health Office (PPHO) explained

“Four hundred and seventy five are already discharged from hospitals, 140 are still receiving treatment, and one person died,” he added.

“Five cases are in ICU rooms. Two of them need to use the breathing apparatus. We have 610 beds for high-risk people in hotels, but right now 418 are used. At the field hospital at PSU, we have 170 beds, and now 60 are used,”  he said.

“We have worked with the PPAO to conduct proactive screening in 12 areas and conducted swab tests on about 3,000 people. We found nine infected cases,” Dr Kusak continued.

“We also worked with the Social Security Office to conduct proactive screening in six businesses with a lot of staff, and we did not find any infected cases,” he said.

“For Phuket Prison, we went and tested 100 prisoners who had fever but found no infected cases,” Dr Kusak confirmed.

Dr Chalermpong Sukontapol, Director of Vachira Phuket Hospital, explained changes to the timeline of the mass-vaccination campaign underway in Phuket.

Last night Dr Chalermpong confirmed that 35,000 doses of the Sinovac vaccine arrived in Phuket last Saturday (May 15), which were formally handed over by Deputy Prime Minister and Public Health Minister Anutin Charnvirakul.

“Those who receive even just the first injection of the AstraZeneca vaccine will have up to 75% protection against the virus,” Dr Chalermpong said this morning.

“The Ministry of Public Health has explained to administer the second injection four months later,” he said.

“The last day of mass vaccinations in Phuket will be on June 24. We will have more than 70% of people vaccinated and have achieved herd immunity, so that we can welcome vaccinated tourists,” Dr Chlermpong confirmed.

“During June 1-10, we will give the AstraZeneca vaccine to 150,000 people, including elders who are older than 60 years.

“From June 11-24, we will give the second injection of Sinovac vaccine,” he said.

“Yesterday, from the six [mass-vaccination] stations, we provided vaccine injections to 14,631 people, which met the goal that we had set,” Dr Chalermpong noted.

“So far, we have had about 10 people who have had side effects from the vaccination and needed to be observed and under care at the hospital,” he added.

“I assure that in Phuket we do not have people having serious side effects from the vaccination,” Dr Chalermpong said.

Pracha Asawathira, a PhD academic with the Ministry of Digital Economy and Society, explained that so far more than 376,000 people in Phuket have registered to be vaccinated through the government campaign.

“For this second round of vaccinations, we have 202,582 people registered, and 174,217 people have been assigned appointments to receive an injection,” he said.

“We still need about 150,000 more people to be registered, including Thai people from other provinces who work in Phuket and foreigners [on the island],” Mr Pracha noted.

“The registration for foreigners is now open for all kinds of businesses. You can register to get vaccinated right now,” he said.

The Phuket News independently confirmed this morning that non-tourism-related businesses in Phuket can register their foreign employees.

Dr Chayanon Pucharoen, Associate Dean for Research and Graduate Studies at the Faculty of Hospitality and Tourism at the Prince of Songkla University (PSU) Phuket campus in Kathu, explained that, as already evidenced by the falling number of daily new cases, the infection rate across the island is falling.

“Thank you to our people for together reducing the rate by not gathering,” he said.

“Right now, Phuket has the number of new infected cases per 100,000 people lower than the national average. The number right now is the lowest rate we have ever had during the past couple of months,” he noted.

“Don’t be careless. Every time we have new cluster on the island, the rate always increases, so every person must unite to follow the [COVID prevention] measures,” Dr Chayanon said.

Rewat Areerob, President of the Phuket Provincial administration Organization (PPAO or OrBorJor) explained that efforts were continuing to provide support to those suffering deep financial hardship during the ongoing economic crisis.

“The Communicable Disease Committee has assigned the PPAO to help our people,” he said.

“I have coordinated with the local administrative organization in each subdistrict to register their residents to receive survival bags,” he added.

“The number of the survival bags will be from two sources, us [the PPAO] and their own local administration,” Mr Rewat said.

“For now, I want to tell every person don’t forget to wear a face mask when going out because a face mask can protect you from the virus,” he concluded.