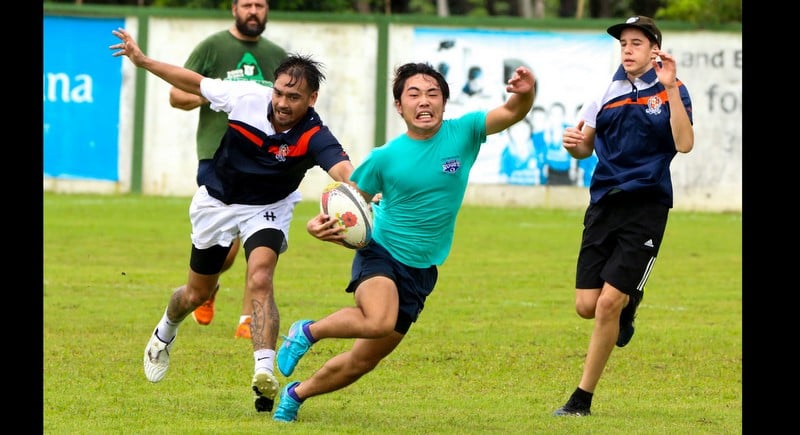 Action got underway at 10:30am with ACGC facing off against the Vagabonds Academy team comprising young academy members, parents and Vagabonds senior players.

Having previously defeated ACGC, the Academy were hopeful of another win which would then advance them to a semi-final berth.

Staring down the barrel of the competition’s ‘wooden spoon’ award, however, ACGC raised their game, recording a 3-2 victory and almost immediately returning to the arena to take on UWC for a chance to claim a spot in the final.

Both semi-finals began just after 11:20am as a soft drizzle drifted over the ACG creating ideal playing conditions for BISP and Can’t Grumble to exhibit some fine touch rugby skills.

However, it was Can’t Grumble that eventually crumbled under the more experienced BISP team’s efforts, ending their tournament on the morning’s second 3-2 score line.

The second semi-final was a brutally efficient, one-sided affair for UWC to run out 8-1 winners against their flagging and dishevelled ACGC opponents, thus securing their place in the final.

Following a brief break, BISP and UWC ushered their starting line-ups onto the pitch for the final to roar immediately into life, supported enormously well by the remaining teams and a crowded ACG gallery of spectators.

Stirling play from both teams kept everyone in attendance entertained as UWC forged ahead by two tries when the half-time break offered a welcome respite for the teams.

BISP would push UWC throughout the second-half, which at one point saw them within grasp of the trophy with a 3-2 score. However, the favourites were able to find another gear as they ran in a further two tries, resulting in a deserved 5-3 victory to claim the title of tournament champions.

Vagabonds RFC president Anthony Van Sleeuwen was on hand to present the winner’s trophy and individual awards. He aso used the opportunity to voice his appreciation for the efforts of tournament organiser Tom George, likewise for Darren Blakeley in his role as senior match official over the three Saturdays, and for all the players and supporters involved.

Plans are already in place for another touch rugby tournament, with details to emerge in the coming weeks, while the Vagabonds senior squad can next be seen in action at the Krabi 7s event being held on July 2.

Social touch rugby continues every Thursday at the ACG starting at 5pm and welcomes everyone to enjoy the activity. For all details, please visit the Vagabonds Facebook page.